The rains have arrived bringing a much needed relief from the dry winter season. Dams are filling up and the bush is now covered in a green coat.  Now  that the bush is much thicker and water is available everywhere it makes game viewing a bit more challenging, but it is still very nice just to go out on a scenic drive.

We did however have an amazing last couple of months ………. as we say, “some National Geographic stuff”. 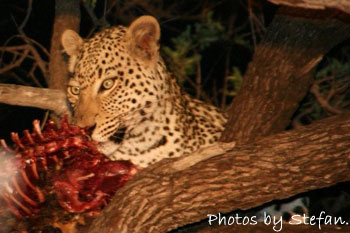 We were VERY fortunate to see a leopard with an Impala kill in a tree and got so close that we could hear him chewing the meat of the bones, and  as if once was not enough he was waiting for us in the exact same tree the next morning. 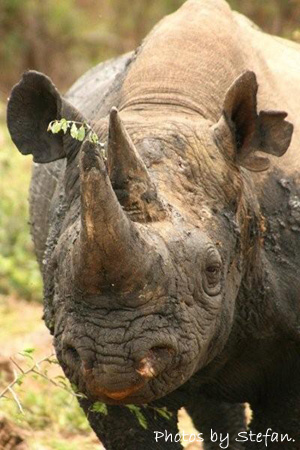 Also we got to see the rare black rhino a couple of times. We saw quite a few individuals, but one old bull was seen the most and is usually fairly relaxed and allowed us to view him at close range. 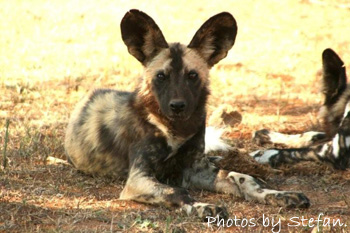 What a pleasure it was to have the wild dogs in the west for quite some time. We had some really good sightings of them and also were able to see their newest additions. Six new pups playing around the others. We also saw them filling their bellies with all kinds of prey which included an Impala taken down right in front of the lodge.

Once again lions have been mating in our area and again we had been in the right place at the right time to see one of natures most interesting things.

The Etali Female and her four youngsters are still doing very well and we saw them with a kill again and watched the youngsters playing with a tail of a gemsbok. This fighting over the tail is an important lesson for the youngsters as they learn valuable skills through playing. 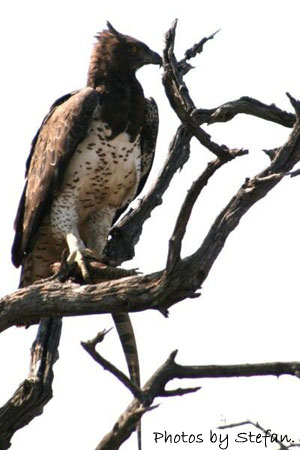 Birds of prey have also been seen more regularly and even a kill has been seen.  A Martial Eagle took down a Monitor Lizard not too far from us and he flew up with it and went to sit in the tree right next to us. 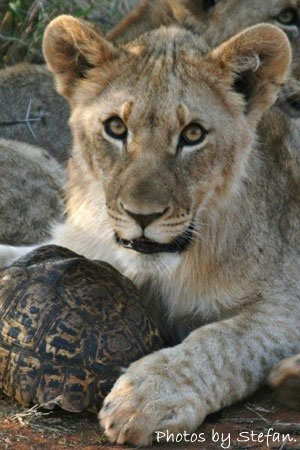 The warmer weather brought all the reptiles out of hibernation and chameleons especially have been seen more regularly. This reminds me of another sighting where we watched some young lions playing with a Leopard Tortoise, and all the poor guy could do was to stay inside his shell and hope that they do not play too rough. 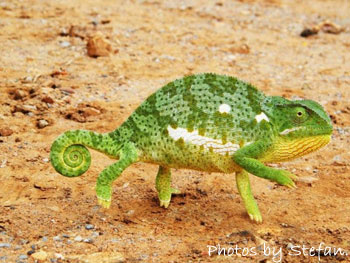 Our favourite leopard known as “Big Tom” unfortunately is not with us anymore. His remains were found not too long ago. He was a very well known leopard who could often be seen close to the lodge. This leaving space for a new male to come and visit us and I cannot wait to see who it will be.

On a positive note, the Matea male lion that we all thought was not going to make it is still around. Though not in top condition he and his coalition partner has set up territory close to our lodge and have been spotted around the lodge as well as at the lodges waterhole.These guys used to have a territory in the south, but two stronger males have driven them out of their territory there, and most likely caused the injuries to the Matea male. Because they lost their territory down there. They have also driven two younger males known as the “Sereti’s” out of the area around the lodge. These two are now looking for a new area for their territory.

This may definitely create some more interesting moments on game drive for which I hope you will be there to enjoy with us.