When looking at the picture below, I was inspired to think of words that described the scene in my own mind. These adjectives include majestic, serene, in control, no fear, at peace, relaxed, dominant, self-assured, and I am sure the list could go on and on…

Unlike the bigger world in which we all live at present, which is so full of nonsense, if there is no human interference, these magnificent creatures are in full control of their space and they show it in their demeanour. Having stopped in for a drink late one afternoon, they then moved off to take charge of the night, as is the privilege of a pair of dominant male lions in the African bush. 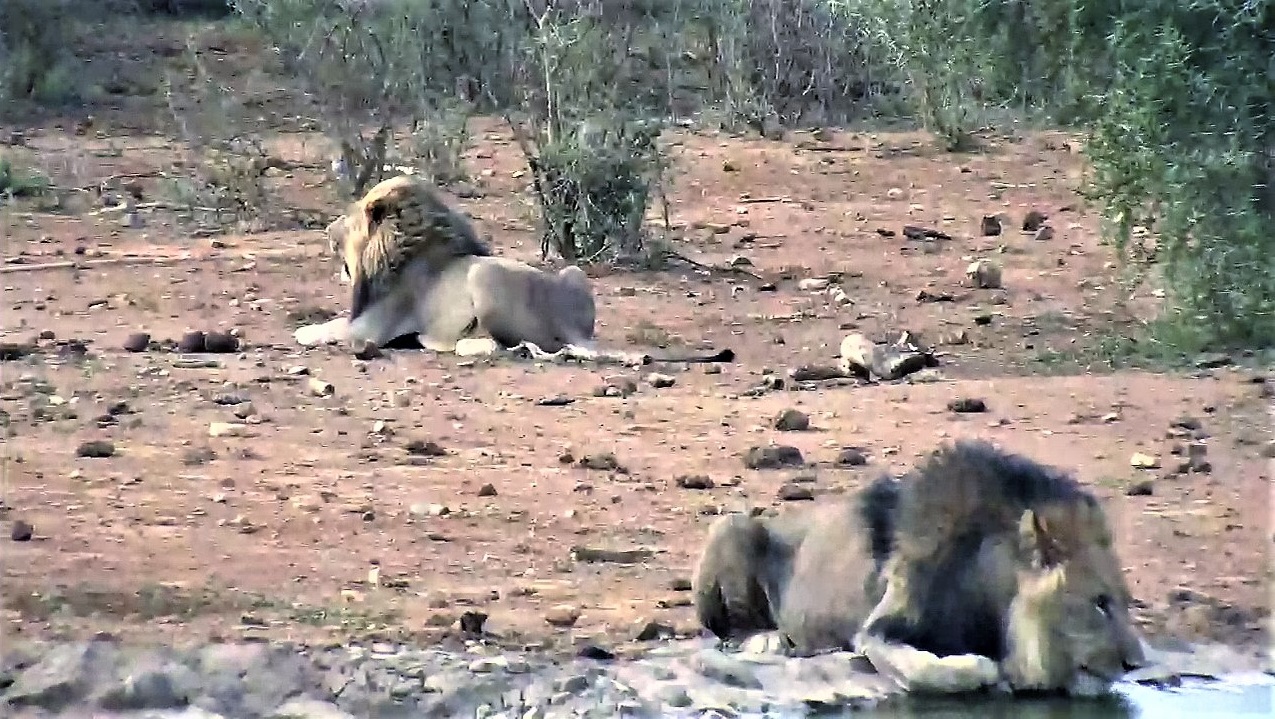 The day we started writing this newsletter is the 21st of June, which for us is the Winter Solstice – the shortest day of the year in the Southeren Hemisphere. For those of our visitors who come from the Northern Hemisphere, this day represents the warmth and long days of Summer. But like everything, the cycle turns and changes, and from tomorrow, we start moving in the right direction again towards Summer. (Yipee!!)

Our days at present are mostly sunny and warm, but with a cold chill in the evenings and early mornings. The impact of this chill is often underestimated, and you do need the warmth of blankets, beanies, gloves and scarves when out on a game drive.

We should never forget how privileged we are to be able to see the sights that we do see – not every day, but on a regular basis, at the Bush House. Occasionally, you also get to see “once in a lifetime” moments… I am always so amazed when, even more special than seeing one of the Big 5 at the Lodge waterhole, we get to see two or more of these iconic species together, in a relatively small space, at the same time. 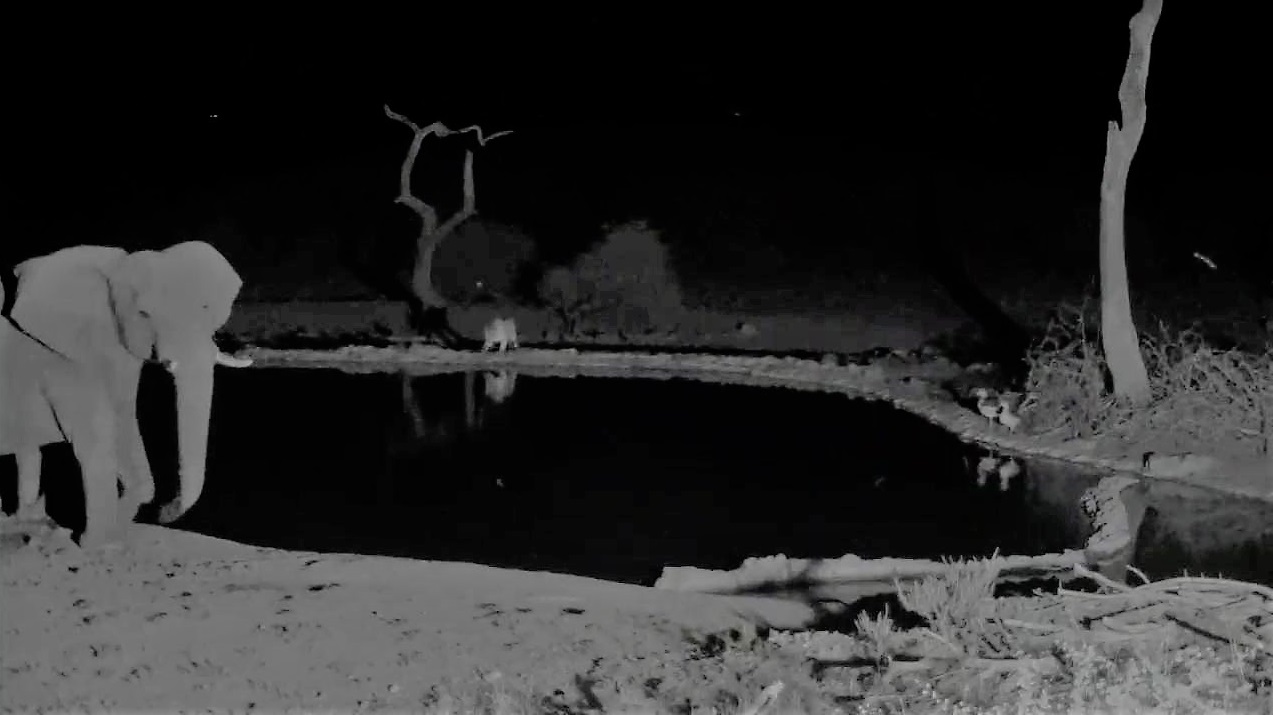 Never seen this combination before! The Elephant at the front of the waterhole is reacting to the guests running down the Lodge lawn to get a glimpse of the Leopard coming in for a drink in the background. The pair of Egyptian Geese are bystanders watching all the activity from under the leadwood tree on the right. 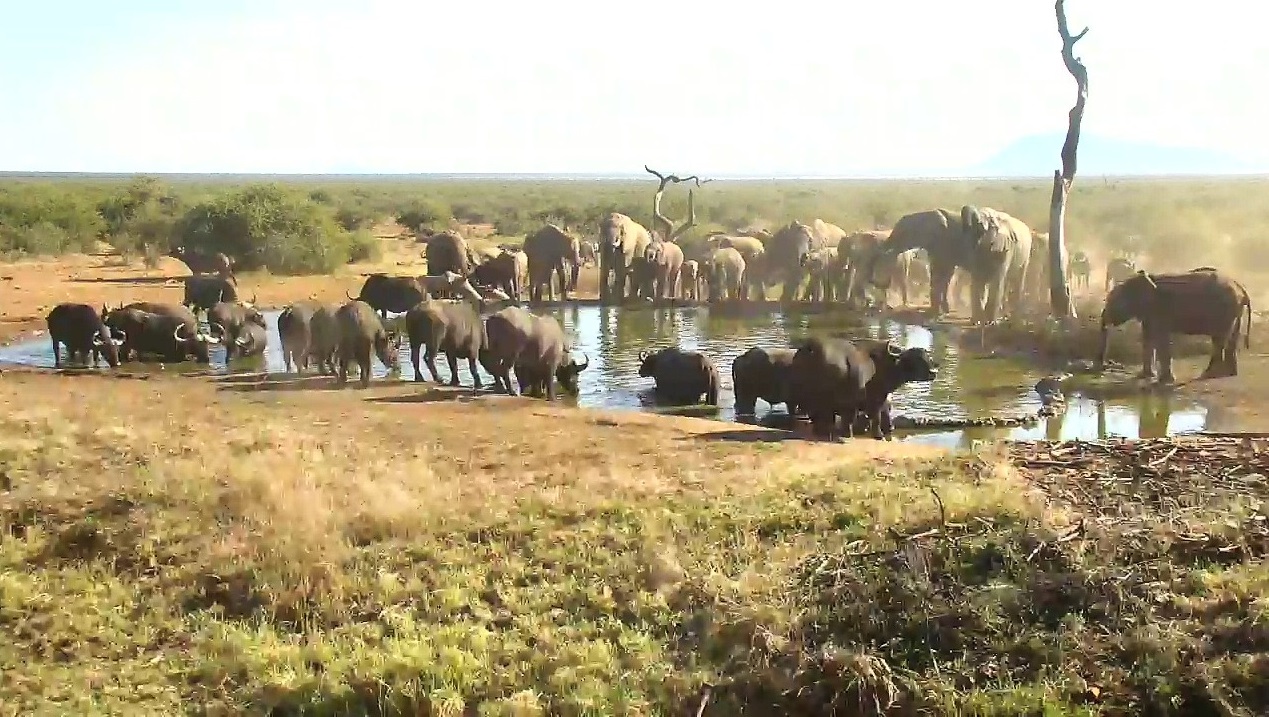 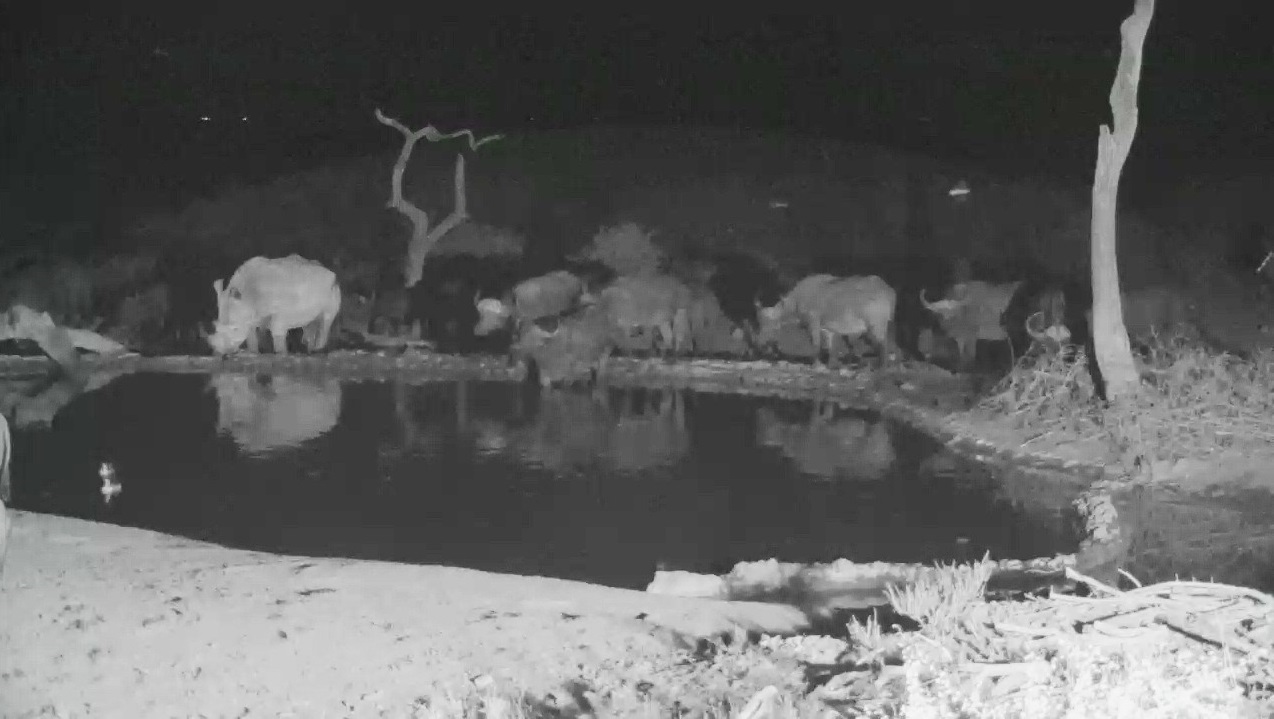 Elephants and Buffalo are never the greatest of friends at a waterhole. The Elephants always end up trying to chase the Buffalo away simply because in their minds they own the exclusive rights to all the water. Inevitably,  because the Buffalo herd usually outnumbers the Elephants, after much dust and confusion, they all end up drinking together.

The White Rhino bull continues to drink, and is totally unphased by the Buffalo herd rushing in for a drink.

Absolutely nothing to do with anyhting else in this newsletter, but a picture we really need to share is the one below of the clan of spotted hyena at the waterhole in the early morning. Not only is the area around the waterhole spectacularly green, which is unusual, but in Madikwe you don’t often see a number of spotted hyena together. In the past, they have not been very successful in the Reserve largely due to the Lion predation. In this case, they look strong, healthy, and fit – ready to hunt for their next meal.

Again, totally unrelated to anything else, but always great to see are these three wild dogs visting the waterhole. Unless they have just eaten, and decided to rest under a tree near the waterhole, these visits by wild dogs are usually very brief. They are mostly on the lookout for potential food, and seldom stop to drink water, getting the majority of the liquid intake they need from the blood of the kills they make. 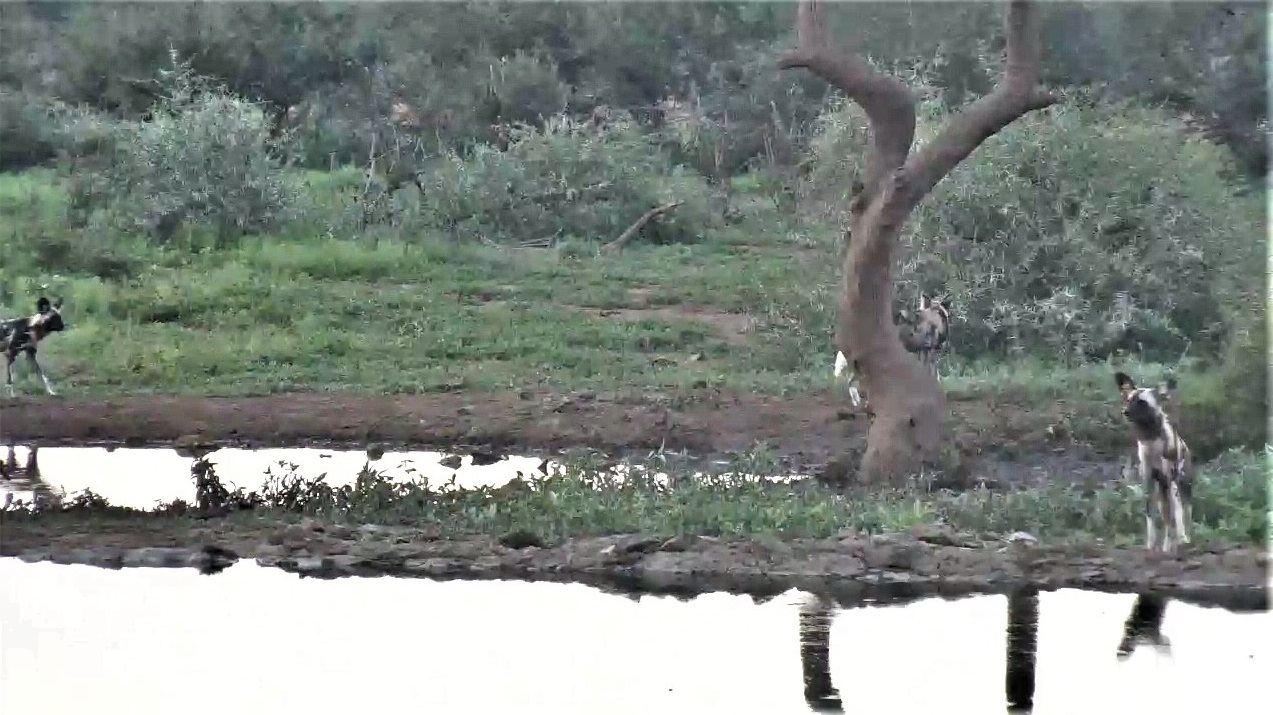 Lastly, we report on what for us is always very interesting – not a kill or Big Five, but two sets of breeding activity at the Lodge waterhole. 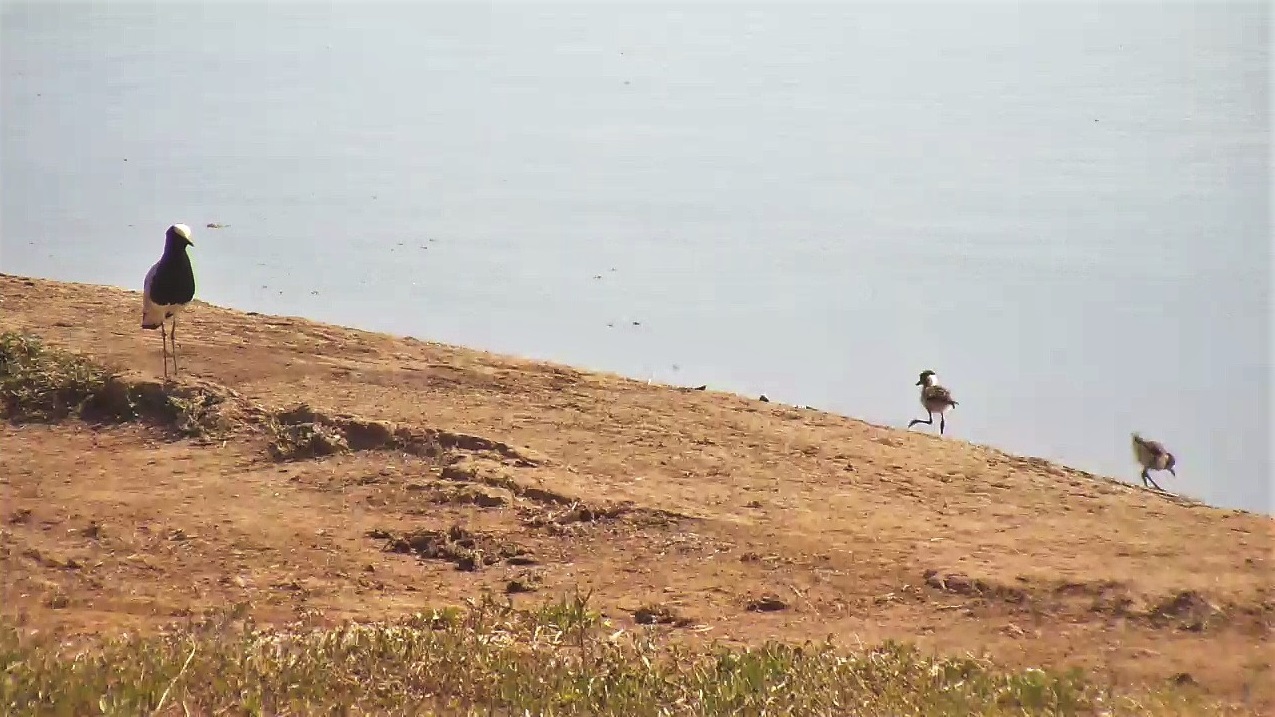 Great to watch them scurry past the entrance of the Underground Hide as they patrol the edge of the waterhole looking for the next unsuspecting insect.

In the earlier picture of the Elephant and Leopard, we mentioned the pair of Egyptian Geese on the sidelines. This picture was taken early this year and usually by then the pair of geese have bred, and have their young goslings with them.

The pattern every year (for years now) has been that the geese arrive around September, raise a new family in the New Year, and all leave again for warmer areas around April.

The senior pair return again in September, and so the cycle continues.

This year something was different, and there were no goslings. April came and went, and the geese were still there. So did May, and part of June… Then one day in mid-June, the female goose appeared with six young goslings. We can only assume that she must have lost her original batch of eggs and the pair stayed on to successfully complete their breeding cycle. 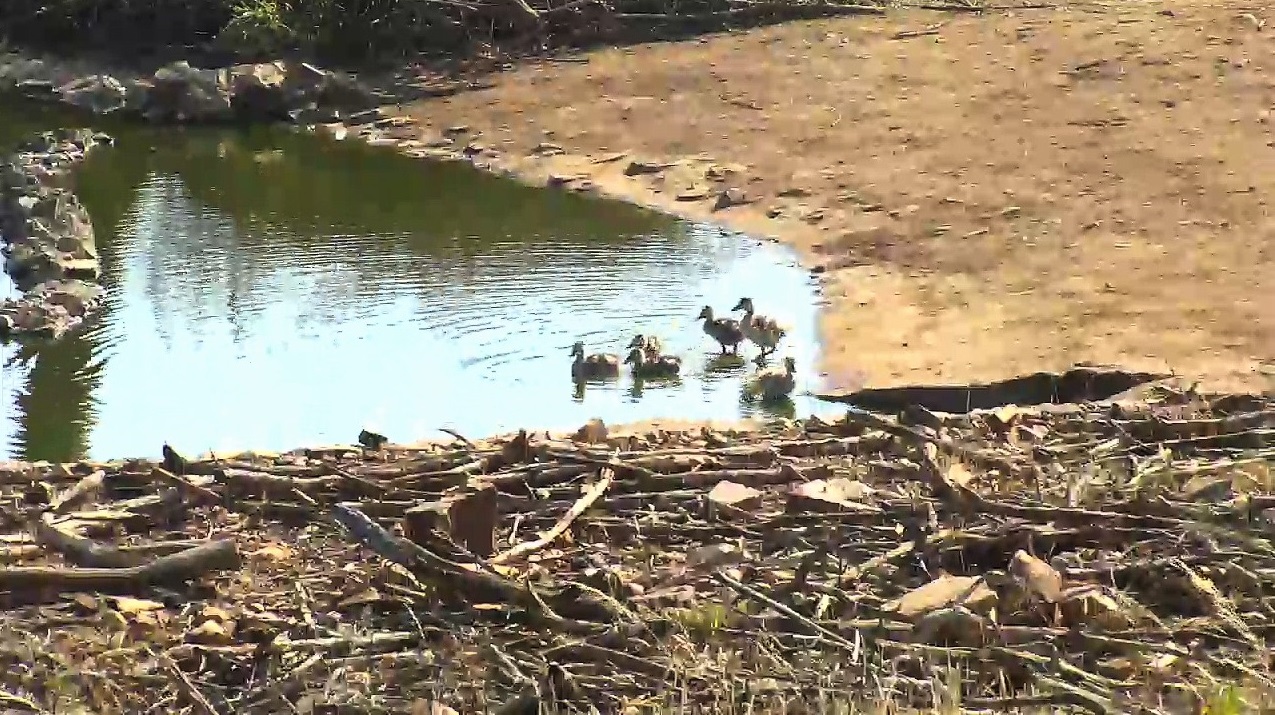 Here they are on their own in front of the Underground Hide. Although they look very vulnerable, don’t be fooled – the parents are never far away. Mother goose in particular is very aggressive, and will take on any threat, no matter the size! 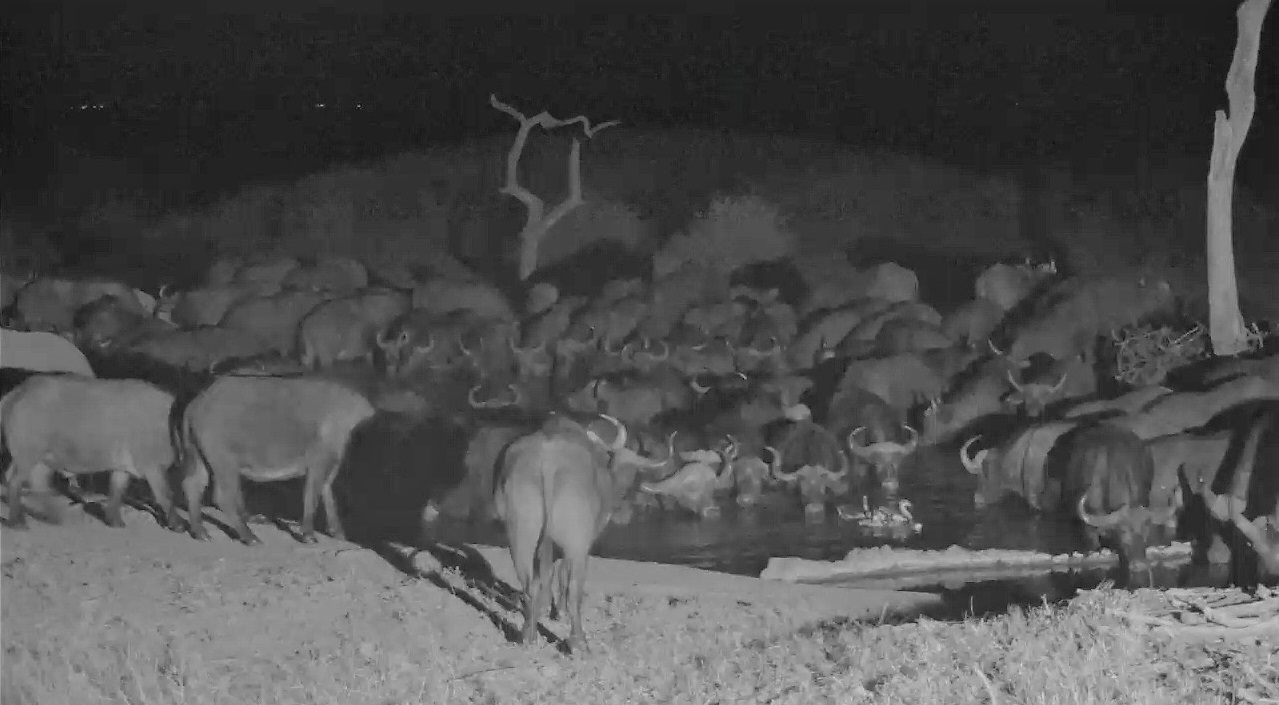 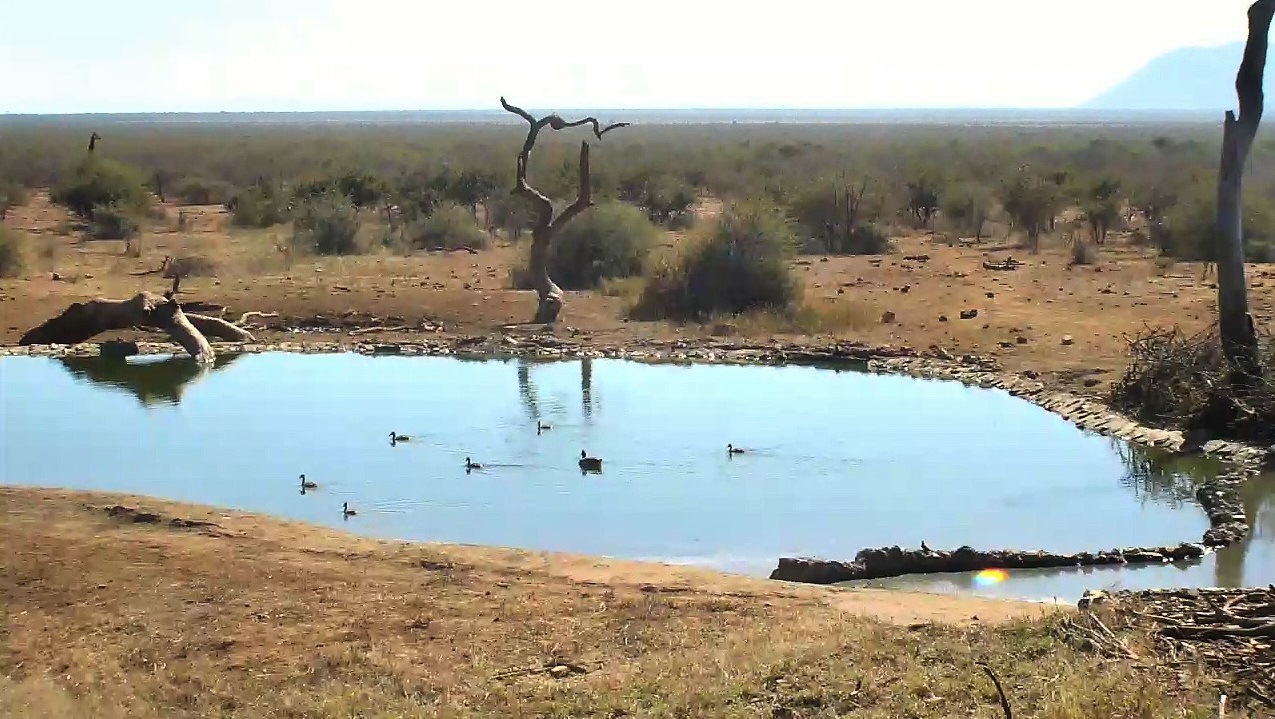 From all of us at the Bush House, take great care, and we look forward to seeing you back with us soon.