Have you ever wondered how close we really get to some of these animals…well, a picture paints a thousand words! I took this photo with part of the vehicle in it so that you can have a rough idea how close we get sometimes…This male was literally an arms’ length away from the vehicle when he walked past us with his fresh kill (a Blue Wilde Beest calf +- 1 month old) and it happened just a few meters away from the Bush House entrance sign! This happened one morning just as we exit the Bush House camp. The male caught the Blue Wilde Beest calf, but could not decide if he wants it for himself, or should he share it with the two lovely ladies that was with him that morning…at the end they shared the kill between the three of them…After eating they decided to pick a spot and they slept there the whole day, which gave us another chance on the afternoon drive to view these magnificent animals…what a scary encounter! 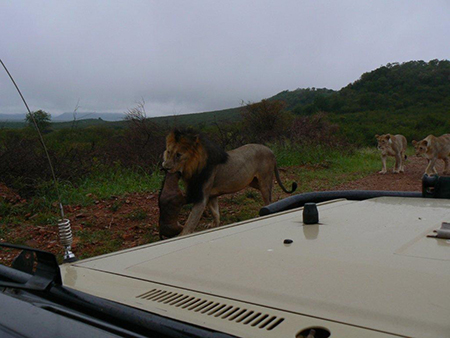 Rhinos!!?? Black Rhino to be exact! Yes Madikwe has Rhinos, Black as well as White Rhino!

We do not know how many we have in Madikwe, but they are here! (Madikwe Management does not disclose a lot of information pertaining to rhinos, including the numbers, for the safety of these animals) 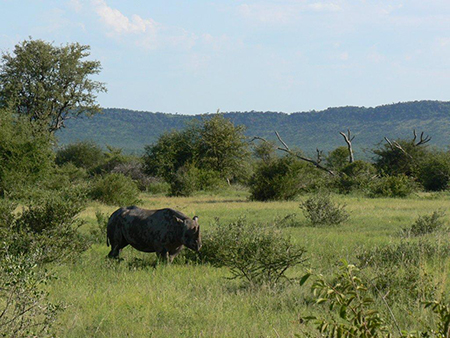 At the moment we are fighting a losing battle! South Africa is losing a rhino every 10.5 hours! There are five rhino species in the world: three Asian and two African, and at the rate that the poaching (illegal hunting/ shooting/ slaughtering) is taking place, the numbers are declining drastically and rapidly!

Since the beginning of THIS year 2013, we have already lost 273 rhinos in South Africa alone! So where ever we can, we should try to support any of the “Anti-Rhino Poaching” campaigns/programs.

I do not know about you, but I do not want to show my children and grandchildren one day only just a photo of a rhino, but hopefully a “live and kicking one”!

And now for some good news!

This happened one afternoon at “Tlou dam”, which is more or less in the centre of the reserve. There were about 30 elephants having a bath and drank some water. We stood there for about 30 minutes. Some elephants after drinking water and, or bathing walked off in the direction they came, and some walked off in opposite direction they came, and then suddenly more elephants appear out of nowhere from different areas. Madikwe has got over 900 elephants according to the latest elephant count…so do not get heart broken if you do not see an elephant on your first/ second drive (because as big as they are, they can and will disappear sometimes) you are guaranteed to see elephants eventually if you join us on the drive, or even if you just relax at the Bush House swimming pool! 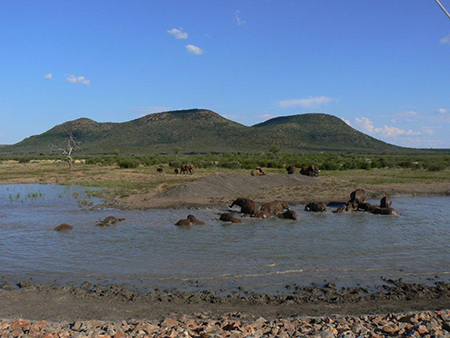 March was a very good month for Wild Dog sightings. At present Madikwe has got two packs. The big pack consists out of 18 individuals and runs around all over Madikwe, but generally restricting their movements to the North/North East of the Reserve, while the small pack restrict their movements to the South/ South West of the Reserve. The majority of the dogs of both packs are males. All the dogs of a pack are generally related. Males/ brothers normally stay in the pack, while females will emigrate sometimes. The Cape Hunting Dog or Wild Dog, also known as “Painted Wolf” is actually the African equivalent of the wolf in terms of social structure and hunting techniques. They are very successful hunters, if not the most successful hunters with almost a 100 % success rate! We have been very lucky and fortunate to have seen them so often and hopefully this will not be “the last of them”, as they can and will sometimes disappear for a few days…this is just once again proof that there are Wild Dogs in Madikwe and we just have to be patient… 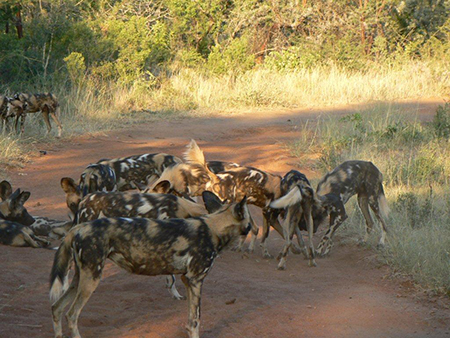 Well folks that is all for now hope to see you again from me Thomas, and The Bush House family.