Our last newsletter at the beginning of January focused on all things good – family joy and celebration having just come out of the Festive season, Summer rains and all the great things that come with that, including the many newborns in Reserve. You could almost hear the angels sing and see the fairies dancing around the Lodge waterhole!! As we all know, life is not like that, and there is another side to every coin – so let’s look at this other, perhaps darker side.

Just as there is new life, there is inevitably death. James Earl Jones who does the narration for the great wildlife film Africa – The Serengeti says “The equation of life on the Serengeti is simple – Herbivores eat plants, Carnivores eat Herbivores.” There is no malace in this, it is just the way life is in the African bushveld.

Seeing a “kill” take place is not everyone’s cup of tea, and we respect that. For others though, this is something they would love to see and photograph, and even for us living in the bush, it is a rare occurrance. You will often come across a kill when the deed is done, and the predators are feeding on their hard won prize. To watch the hunt, the tenacity and canny of the predators, as well as the defences, speed and agility of the prey is very, very special.

Nature being totally balanced, there are no predators that can claim 100% success rate as far as hunting is concerned. The African Wild Dog has the highest score, and perhaps surprisingly many other predators such as Lions, Leopards and Cheetah have very low rates of success, often below 50%.

Visitors to The Bush House will know that between the Lodge lawn and the waterhole is a gulley, inside which is the electric fence – so designed as to still provide a secure environment without obscuring the waterhole from a viewing and photography point of view. This same system runs from the tunnel to the Hide towards the front of our house overlooking the waterhole.

Woken at dawn recently by our spoilt minature Poodle “Kito”, who sleeps on our bed, we watched the large pack of African Wild Dogs, numbering 18 animals, chasing a female Kudu. The Kudu jumped over the gulley into camp, next to our bedroom to seek safety. The dogs tried to see how they could follow, but fortunately did not succeed, and stayed around the waterhole for several minutes to see if the kudu would reappear. 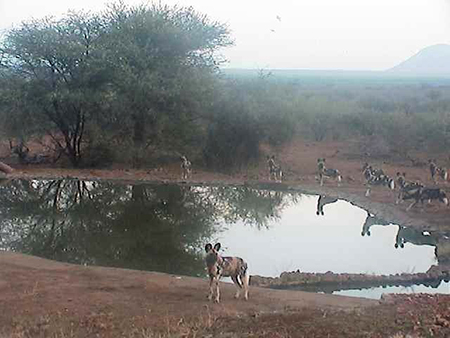 Much later that day, long after the wild dogs had left, the kudu was spotted inside the 2.5 metre high fence watching other kudu near the waterhole. From a standing start, she jumped the fence with ease, and joined her friends. (Score – Prey 1 : Predators 0)

Working at the Lodge swimming pool to change the sand in the filter, we saw some unusual activity on the path close by. A yellow bellied sand snake had caught a skink, and was busy “dealing with it.”

The sand snake is venemous, but not dangerous to humans. The skink is a common lizard in South Africa – longer and bigger than the average garden lizard.

We watched as the snake coiled around the skink, appearing to strangle it in much the same way as a python would strangle it’s prey. The snake then proceeded to devour the skink, head first. This took aproximately 10 minutes, after which the snake lay motionless for a short time on the path and then moved off into the long grass to rest after it’s very satisfying meal. (Score – Prey 1 : Predators 1) 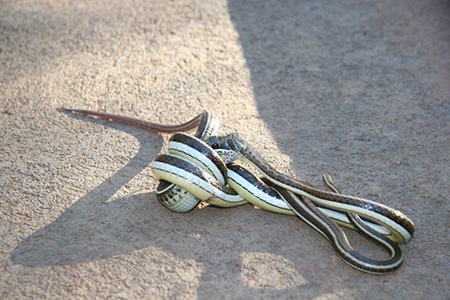 We said in our January newsletter:
“Very special for us is the introduction of several Cheetah from other Reserves in South Africa. These animals have been brought in to re-establish a healthy cheetah population in Madikwe, and it is fantastic to see them again on game drive. For those who may not know, there were only two Cheetahs in Madikwe in recent years, others having fallen foul of larger predators in the Reserve.

Importantly, these Cheetah are “predator aware”, and therefore stand a good chance of survival. We look forward to one day soon seeing our first Cheetah at the waterhole at the Lodge.”

Mid-morning on Monday this week, Thomas called us having just seen four Cheetah’s chasing Impalas and Kudu at the waterhole. Sure enough the cheetahs had caught and killed a female Impala, and were busy dragging it away to a place of safety under a thorn bush.

Unlike most other predators who usually hunt at night or in the early morning or evening, Cheetahs often hunt during the day. This is part of their survival skills, as by hunting in daytime, they avoid competition from other predators that are lying low and resting in the heat of the day.

We dropped what we were doing, and went out just close to the waterhole where Sue took this great picture of the four male cheetah’s feeding on the Impala. Well done to these boys, as Cheetah’s are often the least successful of all the big predators in the African bush. 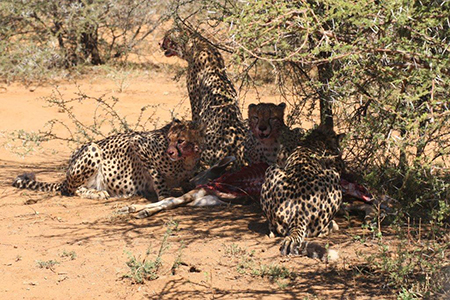 The Impala was soon all but finished. Cheetahs have to eat fast, as any other predator that may have heard the action of the hunt would discover the kill and would have chased the Cheetahs off. (Score – Prey 1 : Predators 2).

As the nights and early mornings get cooler with the approach of winter, our pair of Egyptian geese have left, as they do each year at this time. We can expect them back again around October which is when they arrive to start breeding again. This year they had four goslings, but sadly only one survived, the other three falling foul of predators. Not sure how to score this one, but it feels good to say – (Prey 4 : Predators 5) – Much more even!

The Hide at Bush House continues to be a delight for our guests. Let’s celebrate with two recent great pictures: 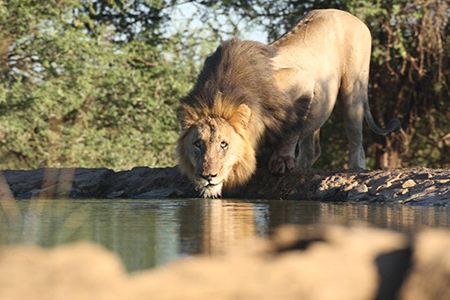 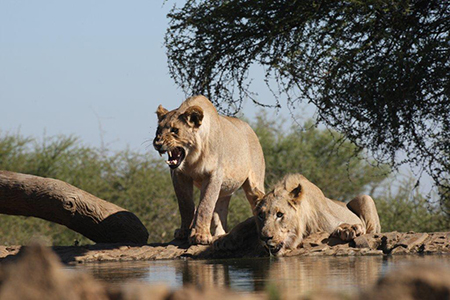 As well as during the “relax and chill time” between game drives, the Hide is often used by those who do not necessarily want to go out on every drive, and sometimes the competition is great between guests comparing notes and stories about who saw what on drive versus who saw what at the Hide.

Come and experience the wild for yourself – we’d love to see you back again soon!