Where did the rain go? The last few months in the bush have been tough on all the animals and plant life.

The heavy summer rains that boost the wildlife and provide it with the necessary nutrients to pass through the dry winter months never really developed. Nonetheless sightings have been brilliant and many rare and unseen animals have thrilled our guests.

On a morning drive, travelling to the center of the reserve to enjoy a coffee stop on top of one of the mountains, we bump into one of those elusive animals that many guests wish to see but only hear of.
The honey badger, this nocturnal forager appears in the middle of the road 3 meters in front of the game viewer. As a guide I have only once before seen one on drive and this morning, we had a mother and pup honey badger playing around before returning to their burrow. Thankfully, they stayed around just long enough to get some photos. The honey badger has the reputation of being one of the toughest animals in the bush. This youngster certainly showed his attitude towards the game viewer giving us all a wonderful sighting. One the smallest birds in the bush and one that should not be overlooked are the Violet- Eared Waxbills.
Looking at birds isn't everyone's favorite pastime, but they are part of the bush and going out to find some of the most colorful often puts great smiles on our guest's faces. Coming back from drive we spot a flock of canaries and waxbills. And to our great delight, there are Violet-Eared Waxbills amongst them.
These beautiful colored birds, like canaries, are seed eaters and when the grasses in the bush drop their seeds it's a feast for all. Thankfully and with some patience this little male waxbill hops closer and closer to the vehicle. Even the non-birding guests loved taking pictures of him. Wake up call in the summer was 5:00am, to leave at 05:30am. And one thing we always set out to do is to look for any predator signs... Lion tracks or leopard drag marks. On this particular morning just before I knock on the guest's door, I can hear 2 very large lions roaring and announcing their territory. Immediately, that promises a good morning, they are close by and finding them would be a great start to the drive. A lions roar can be heard up to 9km, as we remain silent and listen out to judge the distance I work out with the guests that they must be within 500m. Where male lions roam their territory, we as guides often know their route and at 05:30am I have a good idea where they are. And for sure, not even 300m from the lodge this large male lion is resting with his brother. This coalition is called the Kwandwe males and for a whole hour we watch the sun rise over the mountains 10m away from to stunning lions roaring and advertising their presence, a glorious start to the day. What excites a guide... seeing or finding something in the bush they haven't seen before whether it's a bird, flower, tree, insect, mammal or just an amazing sunset or sunrise. I get news over the radio of a unknown leopard that has killed a warthog and stashed it up a tree. Wow, that's awesome news. As we set out on the afternoon drive I discuss will the guests if they want to at least try to find him. As it is a leopard everyone was very excited to try. Arriving where the kill was, we get lucky enough to actually see the poor warthog in the branches, but no leopard to be seen. Behind the vehicle I pick up on the sound of a Marico flycatcher, a bird, rasping away. In general that's an alarm call. I turn the vehicle and face the bird... Directly underneath lies this monster of a male leopard. Male leopards are easily identified by their thick set neck and dewlap and weighing up to 90kg, twice the size of a female leopard. It's the second recorded sighting of this male leopard and we all managed to get some great shots. For all of us it was and still is a memory of a lifetime. The toughest question to answer is? Do we have snakes? And the honest answer is, yes we do.
Africa has one of the largest snakes and smallest snakes, deadliest and also some of the friendliest. They are awesome rodent killers and also help control bird populations. They fit in the cycle of life as important as lions controlling wildebeest herds. One thing we try to make sure of is if any venomous snakes slither around the Bush House we safely remove them and relocate them kilometers away. This snouted Cobra found his way to the Bush House and with some careful approaches, caught and relocated successfully. The guests all wanted to see him released and were excited to actually see a cobra in the wild. They are part of the eco-system and remain a vital part in it. Just before dropping him in the shaded surroundings of the mountains we captured some shots of his stunning hood and his intense stare. 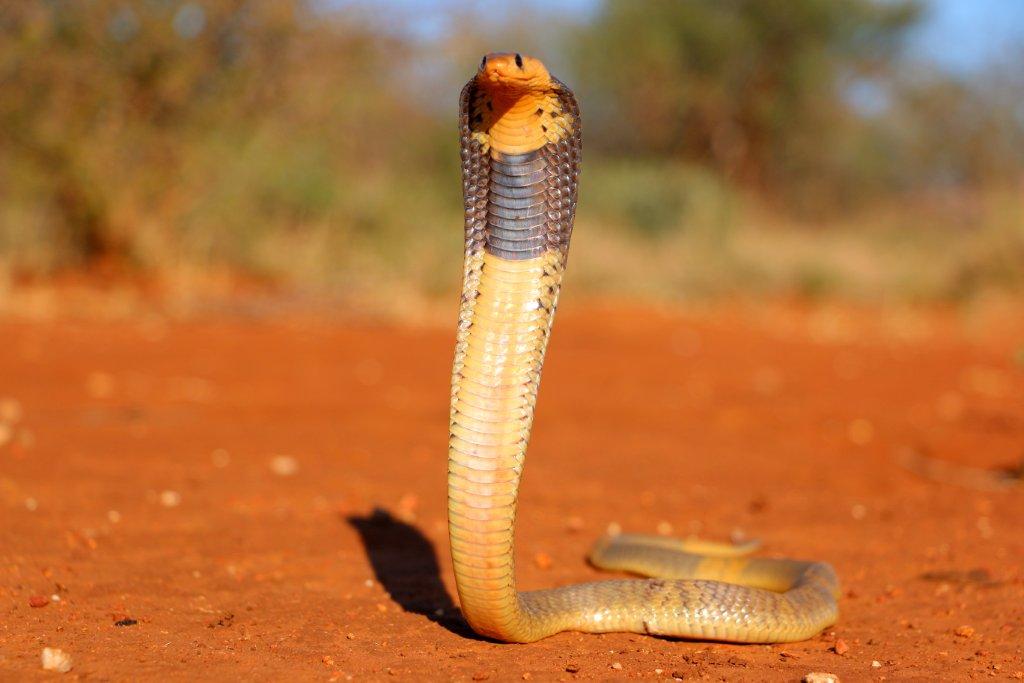 I wish you all a memorable game viewing experience here at the Bush House and fingers crossed you will see all of these stunning, magical and wondrous creatures in true wild surroundings. Remember to ask lots of questions and always have your camera at hand, you never know what might be around the corner. Happy wildlife viewing to you all.