You may or may not have heard of the movie "The Gods must be Crazy" written and directed by South African Jamie Uys. Great comedy if ever you come across it. In real, and far more serious terms, this year the Gods must be crazy in terms of what we have received as a rainy season! By now, the start of May, our rainy season is over, and we have had well less than half our normal annual average. For a region that is traditionally arid, this is potentially devastating, both for humans and animals alike. Without water, obviously nothing can survive, and for the herbivores, the low rainfall also has an enormous impact on the quality of grass and acacia thorn scrub for the grazers and browsers. 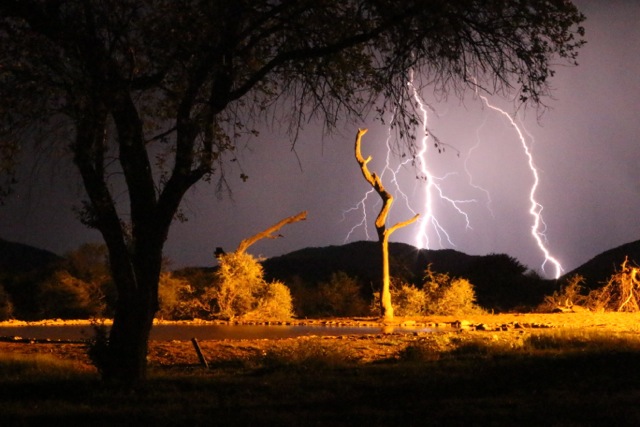 Although we maintain a lush lawn for our guests between the Lodge buildings and the waterhole, much of the water used for this comes from our "grey water" plant, and is therefore making good use of already used water. We also maintain the waterhole level with this "grey water", and only top up with fresh water when absolutely necessary.

Our next rainy season is only likely to start in November 2015, and until then we will all have to be "super-efficient" at utilizing the meagre resources we have. We are in the fortunate position that Madikwe is managed by a superb team of highly knowledgeable and well qualified Parks personnel, and together with input and commitment from Lodge staff and Investors, will surely get through this most challenging time.

Nature has a fantastic way of working, and surviving - has done so for millennia, and will do so again, with a little help from us, her friends!

The waterhole, as always, has been busy over the last few months, and has delighted guests and ourselves on many occasions. Whilst we never guarantee sightings, which you realistically cannot do in a wild environment, we do have the privilege of the Big 5 visiting us regularly. Some more often than others - the Leopard is still only an occasional visitor, and sightings are very brief. That said, the African bush is not just about the Big 5. Guests often get as much, if not more of a kick out of witnessing the unusual or unexpected. 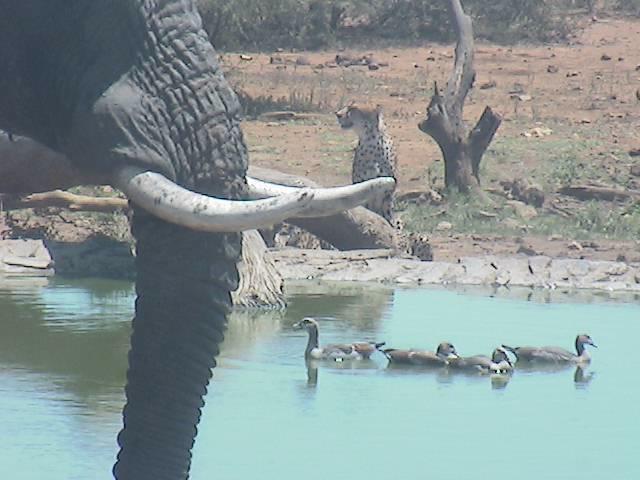 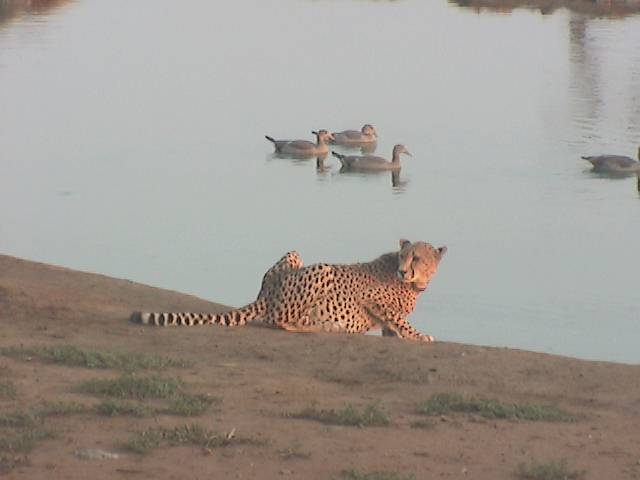 The Cheetah in the background in the first picture is one of a coalition of four males that visited the waterhole one afternoon, and were not phased at all by the presence of elephants. The second picture is a single male Cheetah that appeared early one morning at first light. In both cases, the Egyptian Geese family chose the route of safety on the water, rather than tempting fate.

Other cats - Yes, even the previously described illusive Leopard has been seen at the waterhole late at night. The second picture, taken right in front of the underground Hide, is that of a spotted Genet, often also very difficult to "spot" in the African bush. 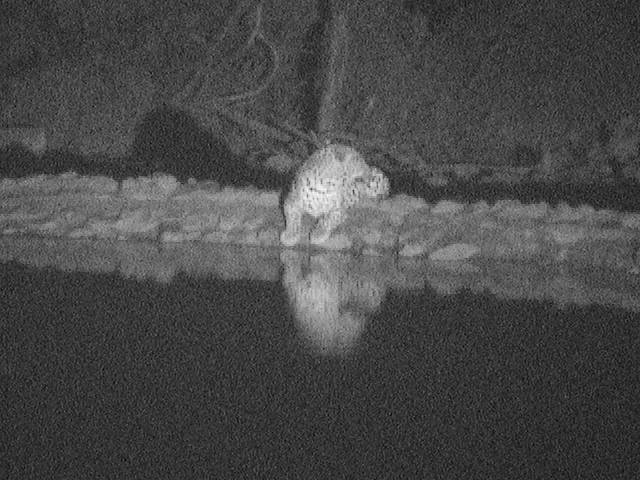 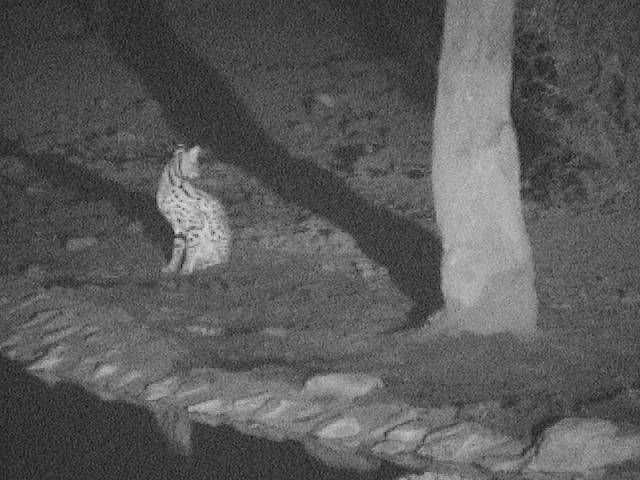 Did you know that we have four sub-species of Elephants in Madikwe? You can tell them apart by their colour variants. Light grey, mid-grey, dark grey and brown. Very unusual to see them all together at the same time! 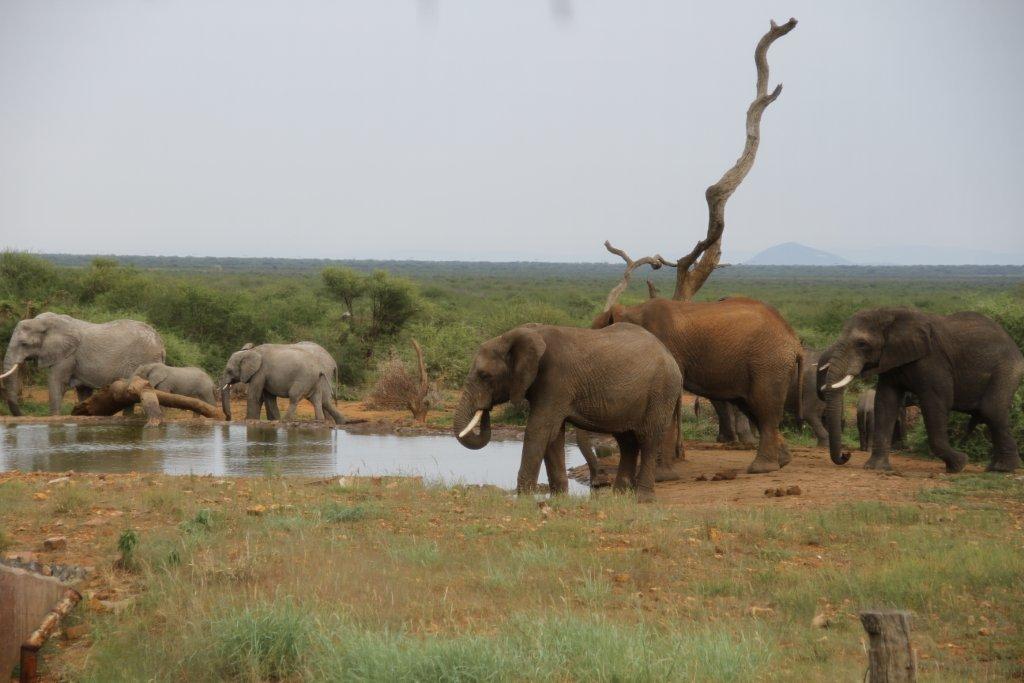 Occasionally these very large pachyderms can come into conflict with other large African herbivores, such as Buffalo, especially if they are all after the same thing - in this case, water. Buffalo, as individuals, are no match for the African Elephant, but in numbers can be a formidable force. In the first picture below, there was a stand-off of sorts with a large buffalo herd immersed in two-thirds of the waterhole at the Lodge, and elephants drinking on the other side. Kind of a "no animals land" in the middle. 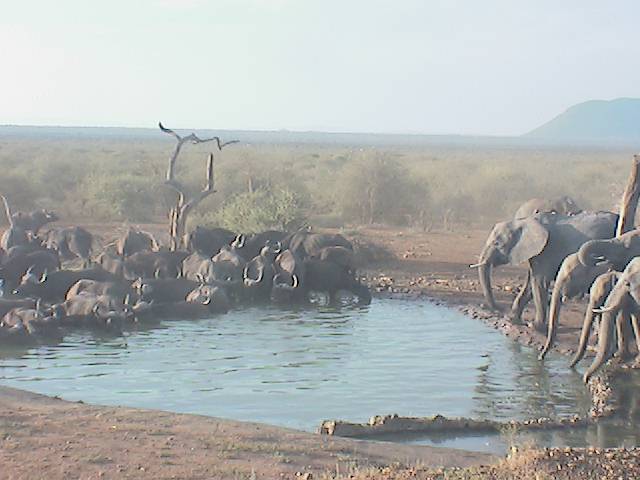 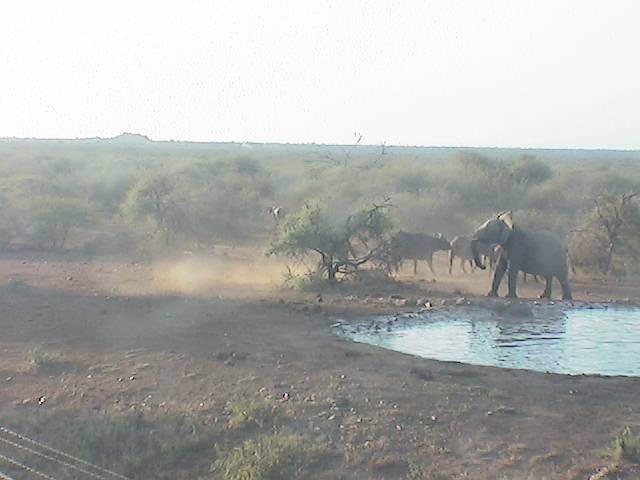 When the herd of Buffalo had had their fill, they started moving off on their own. This was not good enough for an Elephant teenager, who typically had to show off, and chase the last of the Buffaloes creating a cloud of dust, and great photo opportunity.

In Afrikaans, (South African language similar to Dutch), when you see for example, an animal specimen that is really special - at the top of it's game, people will say "Daar's 'n Meneer", which loosely translates into "Oh Boy - that's a Big One."

The Buffalo Bull below fits this description well, as does the male Warthog. Buffalo bulls can weigh up to 900kg, and have a seriously bad temper to match. You do not want to meet this fellow on foot on a dark night! This Warthog has a tremendous set of tusks, and would be able to defend himself against many predators as a result of his impressive set of upper jaw canine teeth. The lower jaw also has a set of protruding, even sharper teeth or tusks. 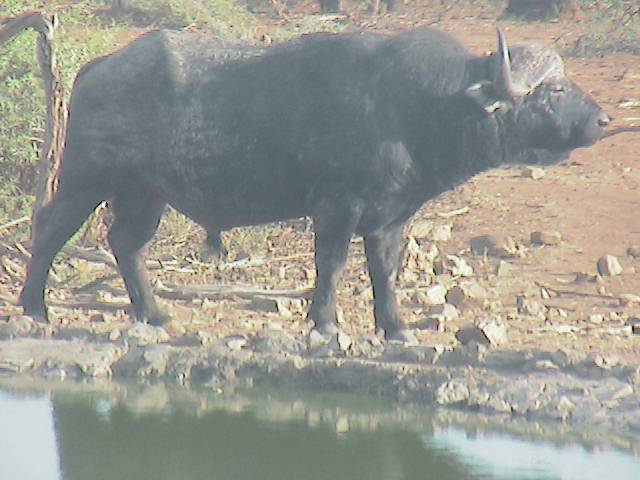 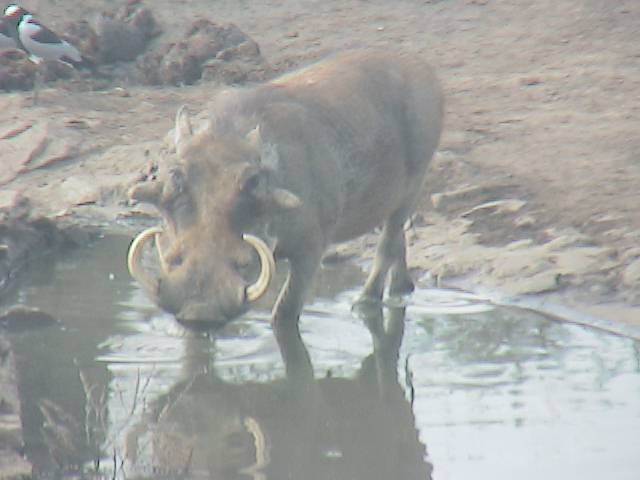 Red Hartebeest occur in Madikwe, but are often only seen in very small numbers. They are one of the fastest antelopes in Southern Africa, and seldom need to drink water, getting the moisture they need from plants and tubers.

It is therefore a real treat to see them drinking at our waterhole, and even more so, when there are more than just a few of them. 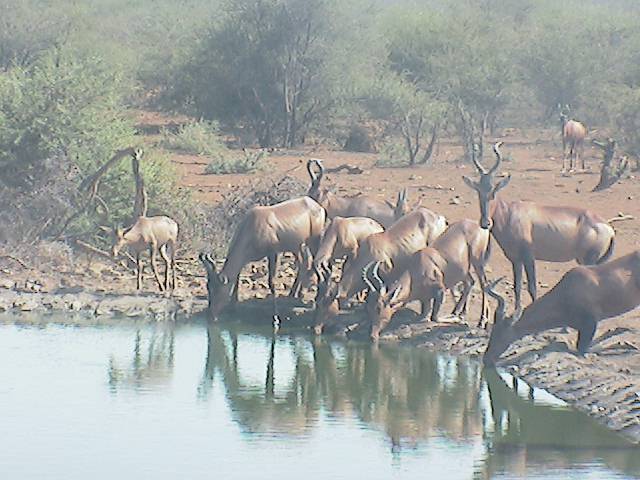 In this picture, you can count 10 Hartebeest, and in total there were over 20 in this herd. It was especially great to see the number of youngsters present which bodes very well for their future.

For those of you who may have missed our last newsletter, please remember that there are opportunities from time to time to help fund and personally participate in various conservation initiatives in Madikwe.

If you are interested, and are planning a stay at The Bush House in the future, please let us know what you might be looking to help with, and we can find out what is available for you and what the approximate costs would be.

As the projects normally involve the hiring of a helicopter, the fees of a wildlife vet, and so on, they are not inexpensive, but very worthwhile. The Reserve really appreciates all the help it can get, and getting up close and personal with some of the animals is truly amazing.

Projects from time to time include:

Take good care of yourselves, and looking forward to seeing you soon