As we come close to the end of September, it is amazing how everything has changed so quickly - literally from one day to the next, we went from Winter to Summer.  If Spring did happen, we missed it completely; must have just been an overnight thing!

So, away with the sweatshirts, hot water bottles in the beds, extra blankets, and now over to longer days, plenty of sunshine, warmer temperatures, and hopefully our first rains of the season which will not be too far away.

In our last newsletter, we spent some time on the 'Small 5', and our guides were up for the challenge of finding these different little creatures for guests.  While this is all very interesting, let's get real though, and get back to one of the main reasons most travellers come to the African bush - The BIG 5. We can even go one better - let's talk a little about The MAGNIFICENT SEVEN!!!!!

For those who are not sure, the Magnificent Seven is made up of the Big 5 (Lion, Leopard, Rhino, Elephant & Buffalo) plus Cheetah and Wild Dog.

We are in the fortunate position at The Bush House to be able to say that ALL of the Magnificent Seven visit our waterhole at the lodge - granted, not all the time, and some species are more frequent visitors than others, for example, Elephants usually visit several times a day, every day!

Whilst not being able to "guarantee sightings" may be a little frustrating for visitors, we must remember that Madikwe Game Reserve is not a Zoo.  Some luck is needed, but rest assured, our Field Guides will always do their very best to find whatever is on your wish list whilst out on safari. 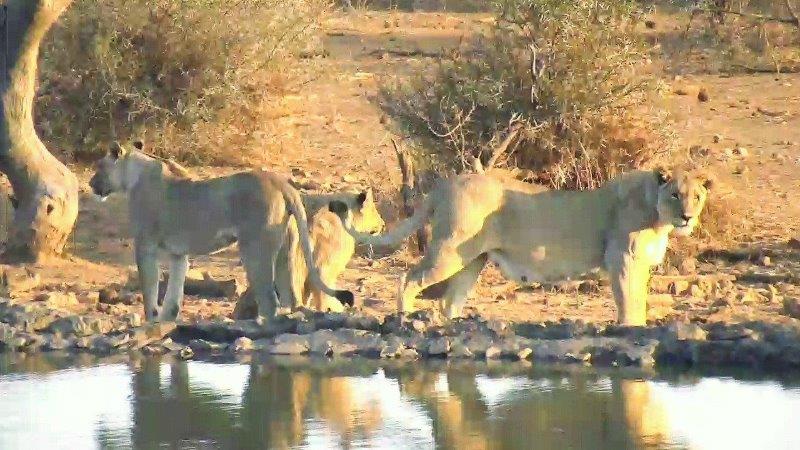 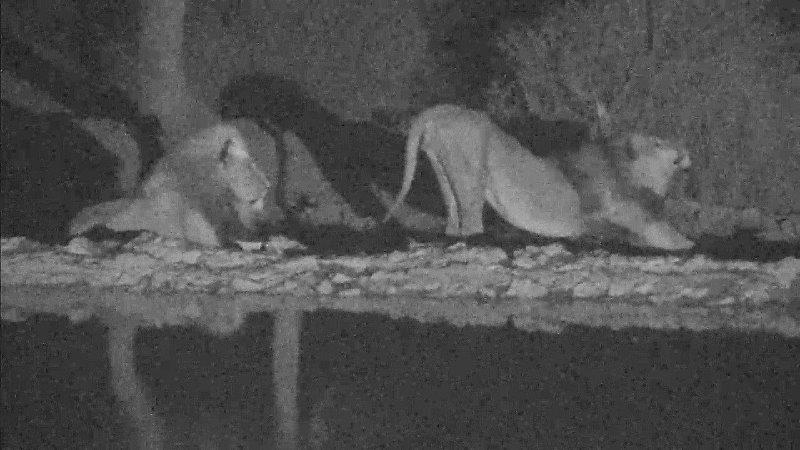 These two lionesses, with a young female sub-adult in the background, came in to drink at the waterhole recently one morning. The female on the right is the mature leader of this small pride, and clearly not one to be messed with!

The two males in the night pic (excuse the lack of quality) were just waking up having spent some time resting at the back of the waterhole. They are the dominant male lions in our area currently, and have an interesting story. Known as the Kwandwe Monamogolo coalition, both are around 8 years old, and in their prime. The Kwandwe male was part of a coalition of two brothers, but sadly the one brother died some time ago. The Monamogolo male was a male lion who moved on his own in the Reserve.

Male lions in coalitions of two or more do better in the wild than single male lions who usually get chased and eventually killed by male coalitions.  As these two were on their own and the Kwandwe bloodline is important to the genetic pool in the Reserve, it was decided earlier this year to put these two males together in a boma to see if they would bond. Surprisingly, it worked, and after several months in the confined boma, they were re-released into the Reserve, and have been together ever since. Hearing these two males call in the dead of night around the Lodge is spectacular, to say the least. 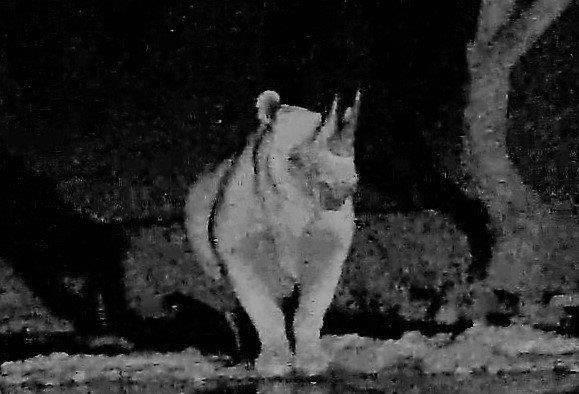 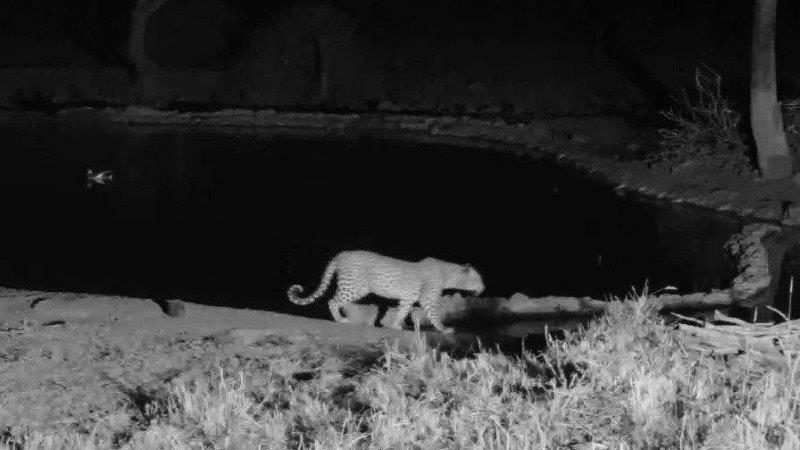 Two very rare sightings, anywhere in the African bush, in the pictures above. Sometimes one has to be a little patient, and always keep one eye on the waterhole when at the Lodge, even at night. This black rhino bull quietly came in for a drink late at night, and if anyone had been in the Underground Hide at the waterhole when this Leopard popped up, I think a heart attack would be on the cards. Not that the Hide is in any way unsafe, just the sheer surprise of this cat arriving and walking straight past the front of the Hide would most likely trigger who knows what??!! 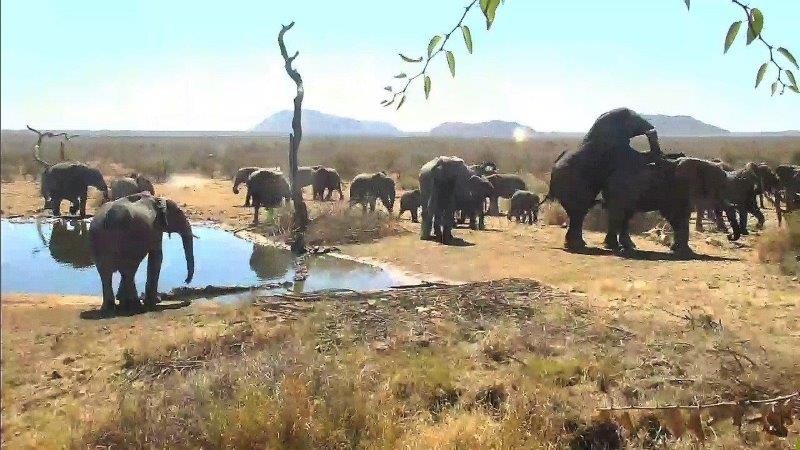 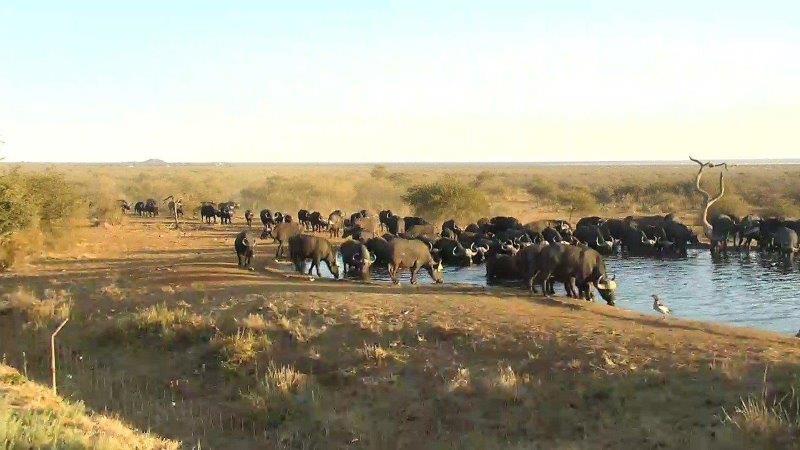 And so to the last two and probably most commonly seen of the Big 5 with us – Elephants and Buffalo.

This herd of Elephants are some of the many that regularly visit….. and there seems to be some effort being made to increase the numbers!! The Cape Buffalo herd coming in to the waterhole in the early morning is a great sighting to photograph as they wander in calmly for a drink. 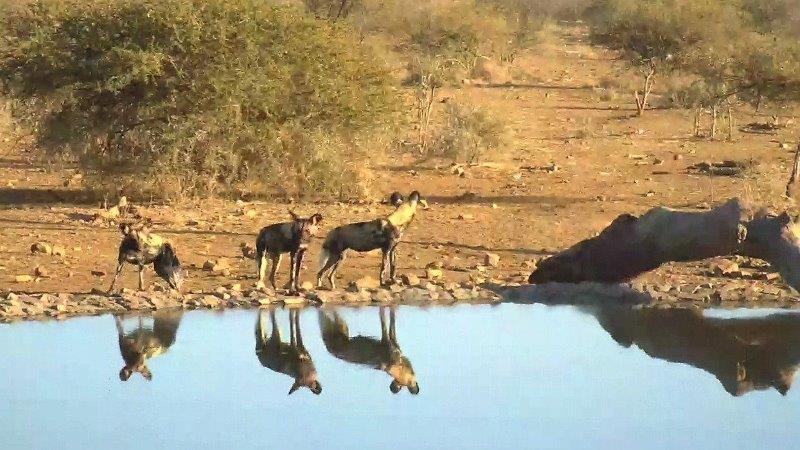 We have often been fortunate over the years to see Wild Dogs on a regular basis at the Lodge waterhole. Usually these visits are very brief, as the dogs normally pass by whilst on the hunt. These three are a break-away group of females from the main pack in the Reserve. We hope that a male will join them in the near future, and this will result in the formation of a second permanent wild dog pack.

The last of the Magnificent Seven to speak about in this newsletter is the Cheetah. Rare and vulnerable, the Cheetah always needs special attention. For some years now, we have only had male cheetahs in the Reserve. A previous introduction of females was unsuccessful, with one dying unexpectedly in the relocation boma, and the other being killed by the coalition of four male Cheetahs, after release into the Reserve.

Obviously females are needed to try and establish a sustainable Cheetah population in Madikwe. First, the coalition of 4 males were moved out of the Reserve last year, and replaced with two separate coalitions of 2 males in each. Through liaison with the Endangered Wildlife Trust, three female Cheetahs have been found and donated by the De Wildt Cheetah and Wildlife Trust to Madikwe.

Three Lodges in the Reserve, The Bush House and two others, have funded the re-location and collaring of these Cheetahs. The intention is that they will remain in the boma for several months to acclimatise to the Reserve. EWT will be closely watching their progress, and when eventually released, they will be monitored via satellite tracking collars. We all really hope that everyone's efforts will result in a new sustainable Cheetah population for Madikwe. 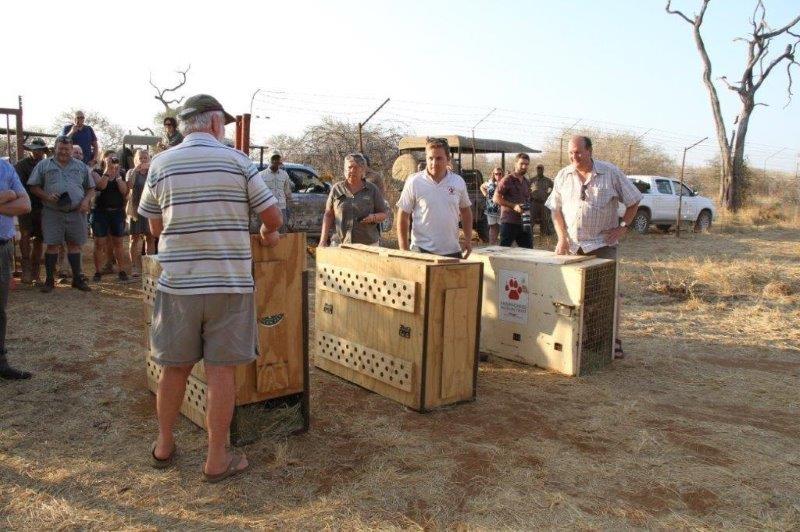 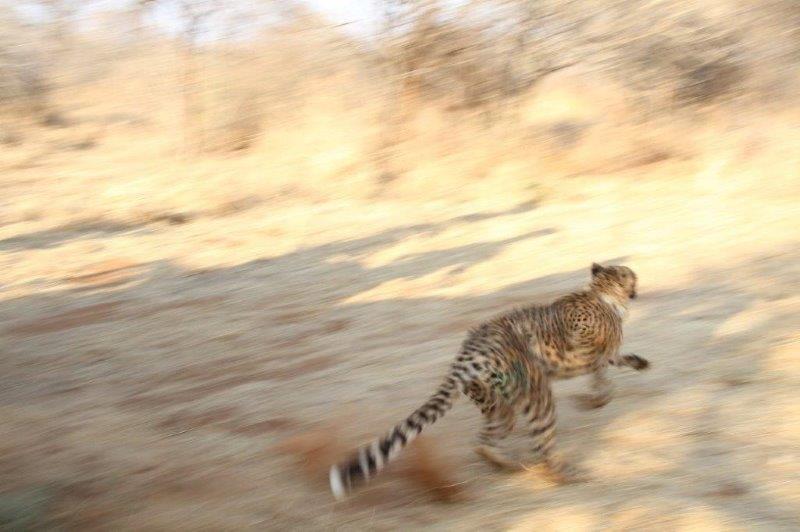 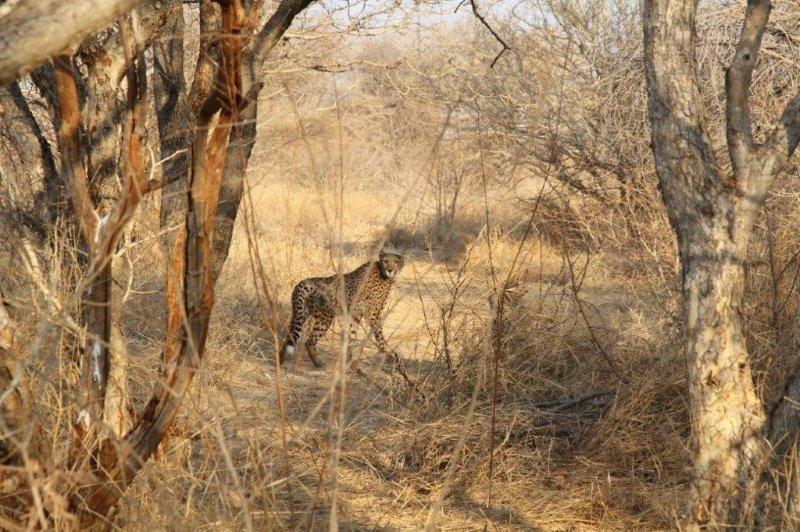 The first picture above shows the start of the release into the boma of the Cheetahs from their crates (Me showing off my best side at the first crate). The second picture is one cat leaving her box in a hurry, and in the third picture, looking back at her friends and the assembled well-wishers.

Cheers for now, and hope to see you soon,