We are very pleased to introduce four new additions to Madikwe. In the past few years the Reserve has not had the fortune of having a successful litter of cheetah cubs, so we are really hoping that this litter becomes successful to help rebuild our cheetah population.

Mom has not been the most relaxed of cheetahs, so for the time being the normal procedures of viewing her have been changed until the cubs get a bit older so as not to put too much pressure on her. However, if you are lucky enough to see her and her cubs it is sure to be a good sighting.

She has been hiding her cubs really well and attempted to lead vehicles away in the past, but in recent weeks she has calmed down a lot and has allowed us to view them.

A lot has happened with our resident pride of lions in the past few months with the dominant males being challenged and the young males of the pride soon to be worked out the pride by the larger males. About a year ago two new young males were introduced to Madikwe for the purpose of getting new genetics into the reserve. They have now become much larger and more powerful as they are soon to reach their prime in their lives. This does not spell anything good for the dominant males of the pride who are reaching the end of their prime due to age and insist on splitting North and South as they cover a very large territory. Very recently, Kwandwe had his hands full chasing the young males out of the territory but because of the seperation the younger males had the courage to challenge him for his territory. For now he still remains supreme and the two dominant males have been joining together a lot more often, which will keep the young males at bay for now.

A lot of time and patience is the key to seeing some action on a game drive, that or just being lucky enough to be at the right place at the right time.

Sometimes waiting for something to happen can take a long time without anything every happening and other times you can get lucky with something like a hunt. Seeing a hunt is rare and seeing a successful hunt even more so.

We were fortunate to have seen our two male cheetahs only for a short while before something happened. As an impala herd walked by, they tried their luck to catch one, but fortunately for the impala, they were unsuccessful this time. A herd of elephants nearby noticed what was happening, and interestingly chased the cheetahs off to avoid any further attempts at hunting, for now! With the bush being so dry at the moment the Shepherd’s Tree will give you that touch of green until the rains arrive.

With the start of spring there are a few trees starting to bud some leaves and some even starting to blossom flowers. The Shepherd’s Tree is one of those trees that when driving past them you will notice its sweet aroma. This all adds to the bush experience and by taking a deep breath you will realise how many different scents there are out there.

A fully matured tree is not only impressive, but it is a very important tree for dryer areas as it gives a good source of shade and is an important food source for browsers. You will normally see many animals under them resting during the heat of they day. 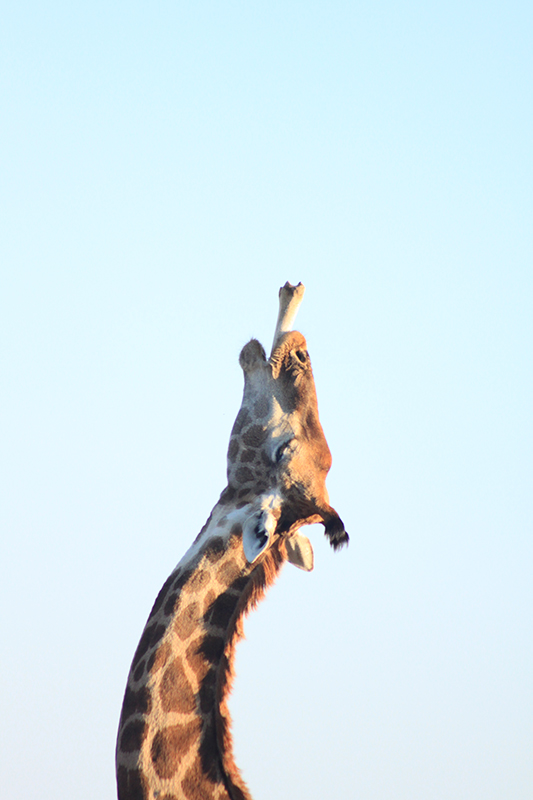 Probably one of the strangest things to come across on a drive is what seems to be an animal choking only to find out they are perfectly fine. One of the most common animals to be seen doing this strange behaviour is the giraffe.

If you look a little closer you will find that the animal is actually doing an interesting behaviour called Osteophagy, which simply put is the chewing of bones to supplement calcium and phosphorus in their diets.

With predators this will normally happen on a carcass as they feed on softer bones, but herbivores need to find uneaten bones laying around to do it and it is always very interesting to watch.

Come and experience the African bush with us as your guides. We look forward to seeing you soon.