Apologies that this newsletter is somewhat later than usual. We sent out our first one of the year in late January and we were all excited at the start of the New Year 2020, but who at that time would have thought…

We are currently open for local South African guests, and are all longing for the day when international travel will safely resume. All the recommended protocols are in place and have been certified, so when you are able and ready to visit, we would love to see you.

Everything else on the ground in Madikwe is good. Animals are well and there are new additions to our Cheetah population (see the Ranger’s Letter). Poaching, thanks to the continuous effort made by everyone involved in the Reserve remains at a low. These efforts could not be sustained without the great support of all our guests through the conservation levy, and for this we are truly grateful.

As a Big 5 reserve, everyone knows that we have Rhino. What we do try and do is not to post live pictures so that the bad guys do not know exactly where the rhinos are. 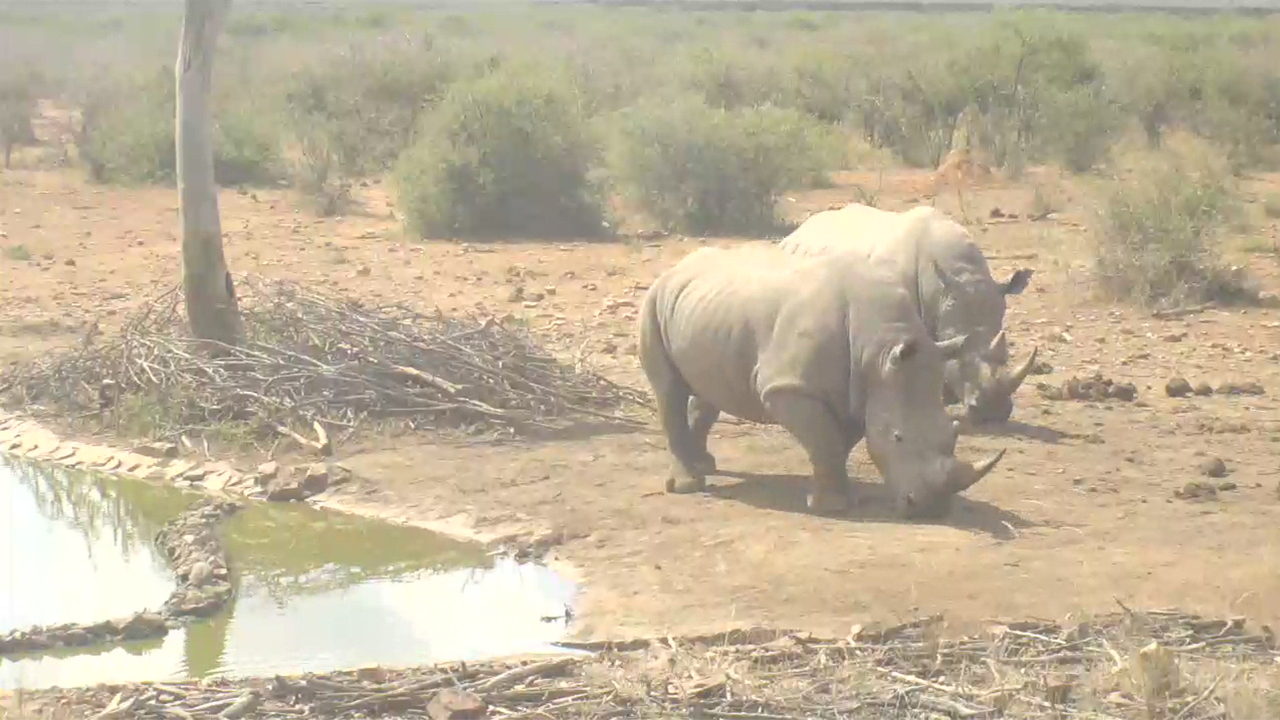 These two white rhinos were right in front of the underground hide at the lodge waterhole one afternoon. This was an unexpected sighting in the middle of the day, and what a photo opportunity just a metre away from the entrance to the hide. 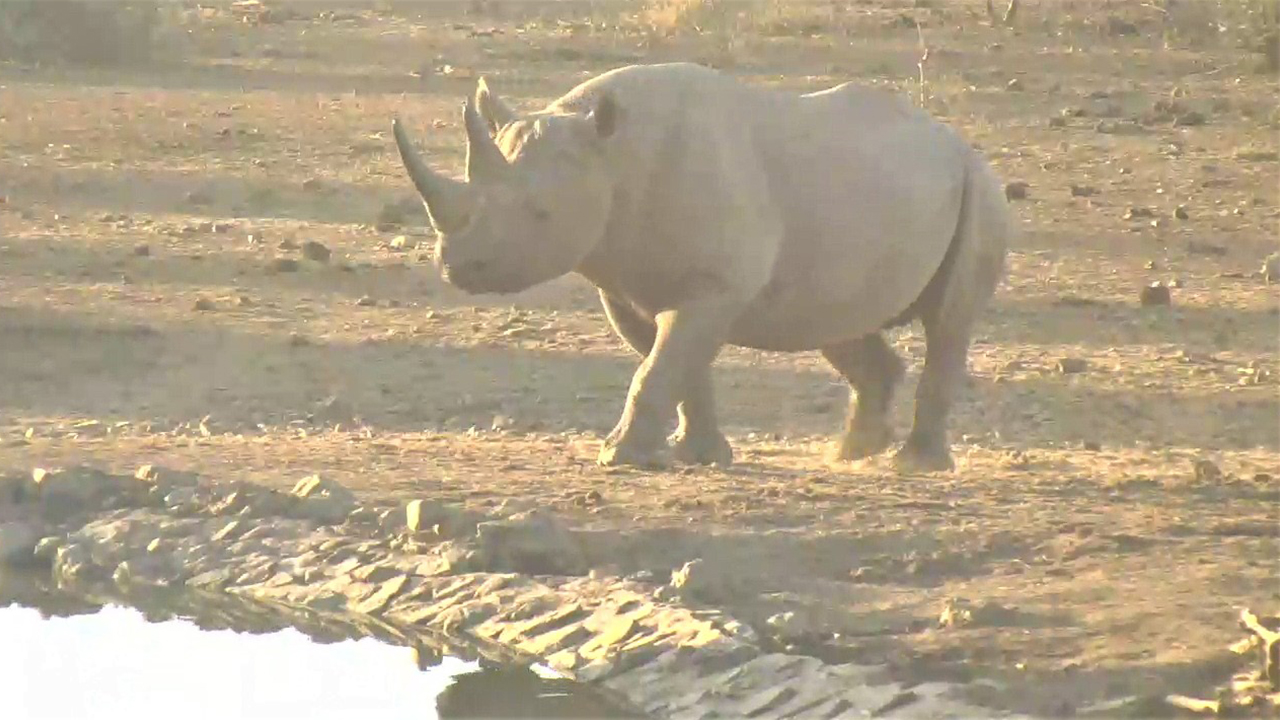 The black rhino bull in the picture above was taken as he was striding with purpose towards the waterhole, obviously thirsty for a drink.

We are a Big 5 reserve, as mentioned before, and most people will regard any rhino sighting as being part of the Big 5. This is not strictly true, but we promise we won’t tell if you don’t. The Big 5 were so named by the early hunters in Africa because they were all considered to be highly dangerous animals. The white rhino is actually a placid animal. You can walk in close proximity to white rhinos and they will almost certainly not attack, whereas their smaller black rhino cousins are always highly aggressive and fearless. The black rhino is therefore then the true member of the Big 5.

Madikwe has a healthy population of the fairly rare brown hyena, as well as spotted hyenas and the vary rare aardwolf. All of these are part of the same family group. Many people would say that the brown hyena is more attractive than the spotty. They have a long wavy coat, sloping back, well defined dark muzzle and stripes on their front legs. 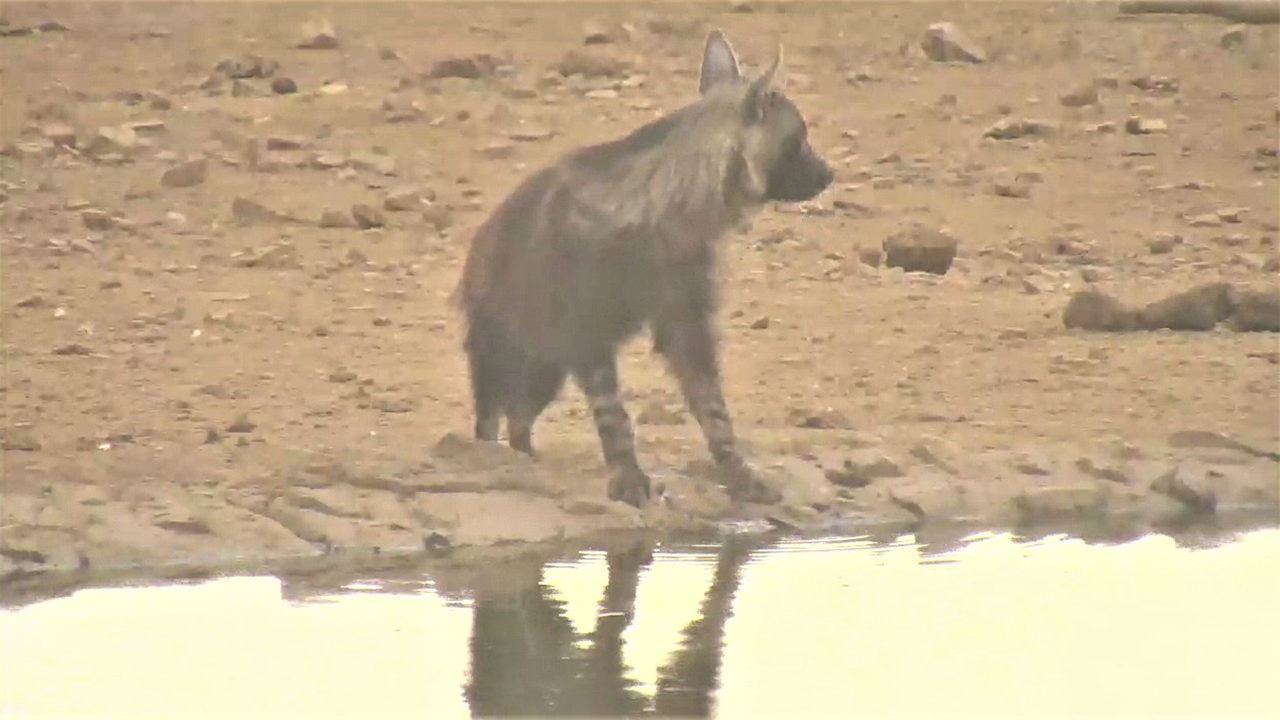 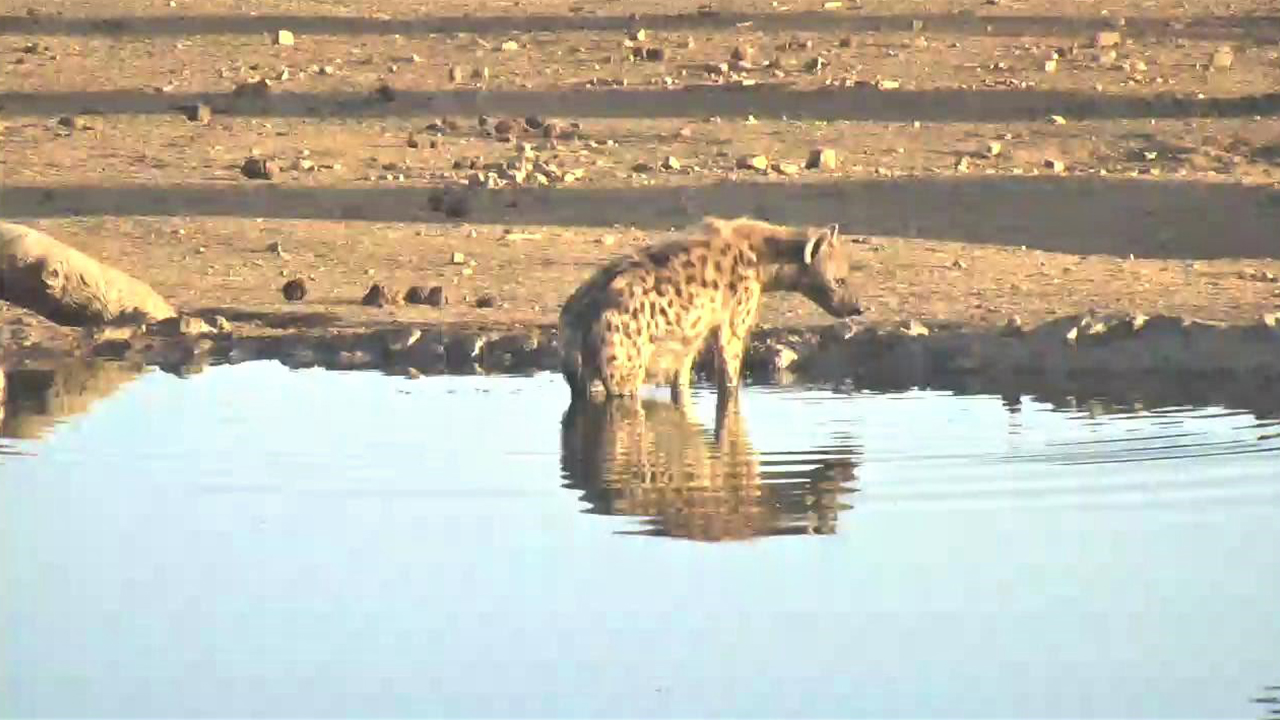 These stripes are unique to each individual, like fingerprints are in humans, and are used for specific animal identification.

The spotted hyena has a sinister reputation, cunning and caniving, not improved in any way by the behaviour of the clans of spotted hyena in The Lion King. This one, in the picture on right, is cooling off in the waterhole, and if you look closely at the face, you can imagine that he is planning his next dirty trick! Hyena clans are dominated by the lead female, with males being smaller in build and subservient of their female leader.

We may not have been busy with guests during the lockdown, but the lodge waterhole has certainly been very active. At times, one could be forgiven for thinking that it was too active, if that is possible. 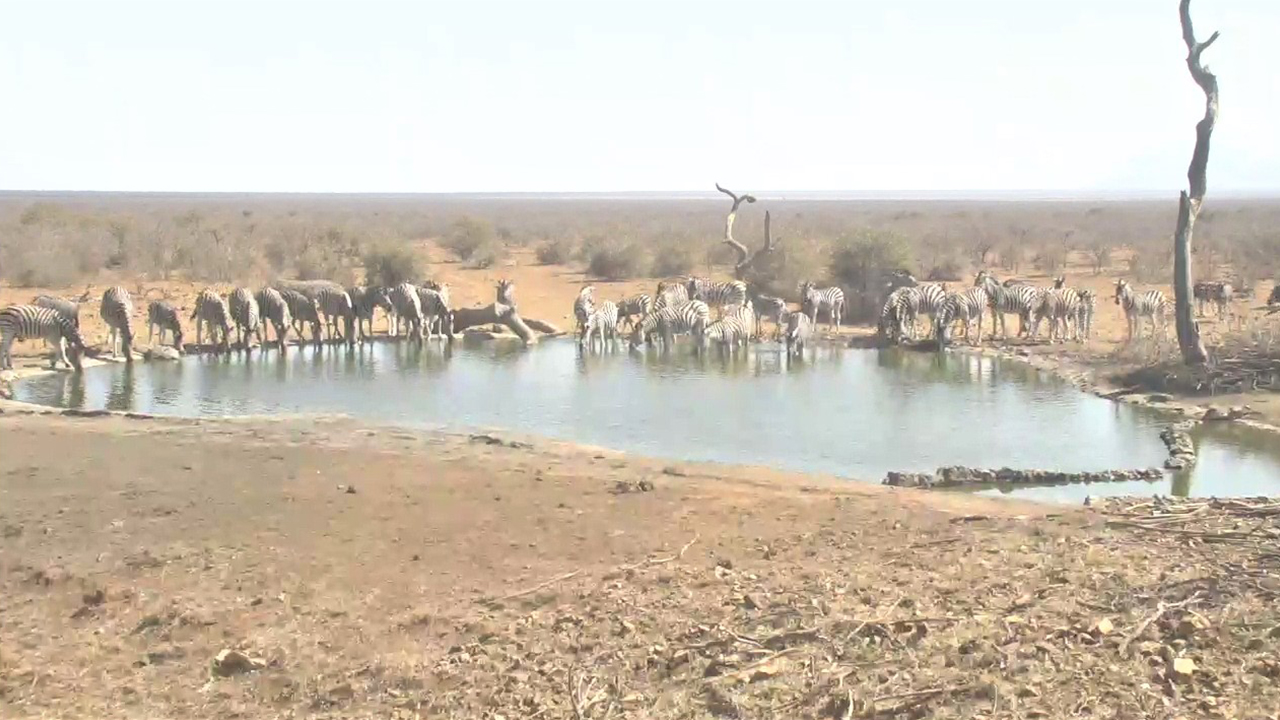 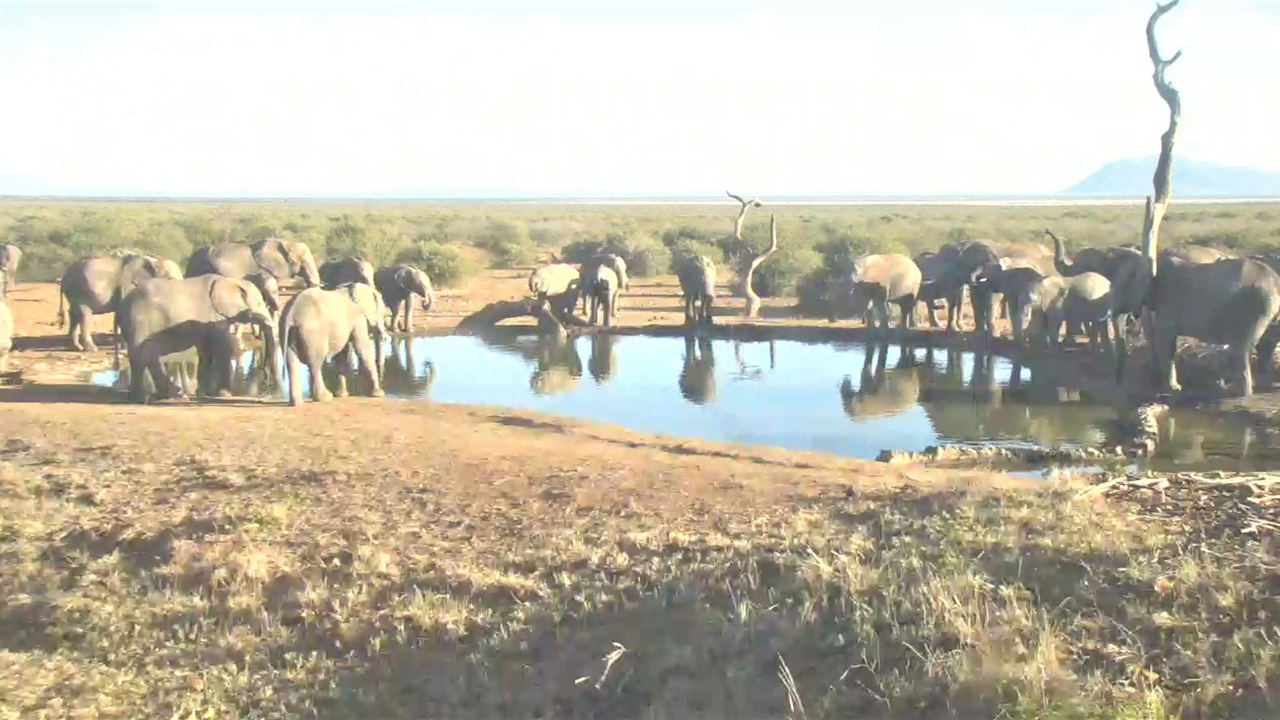 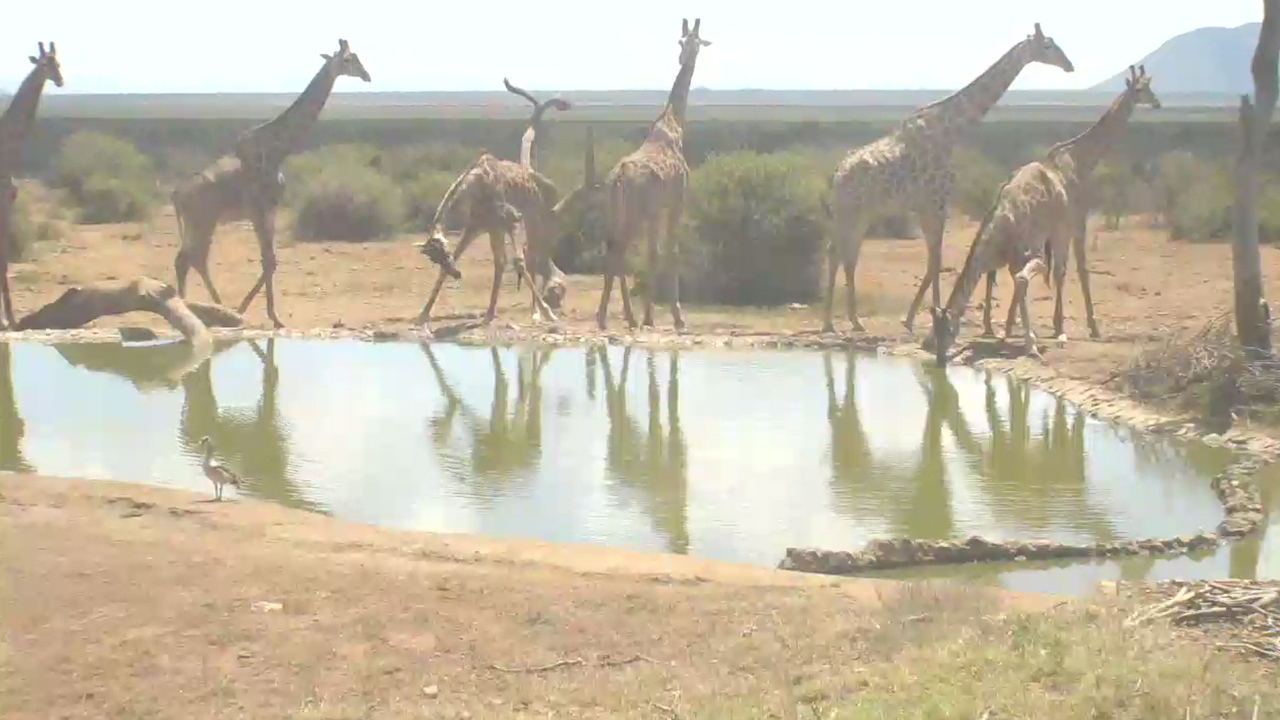 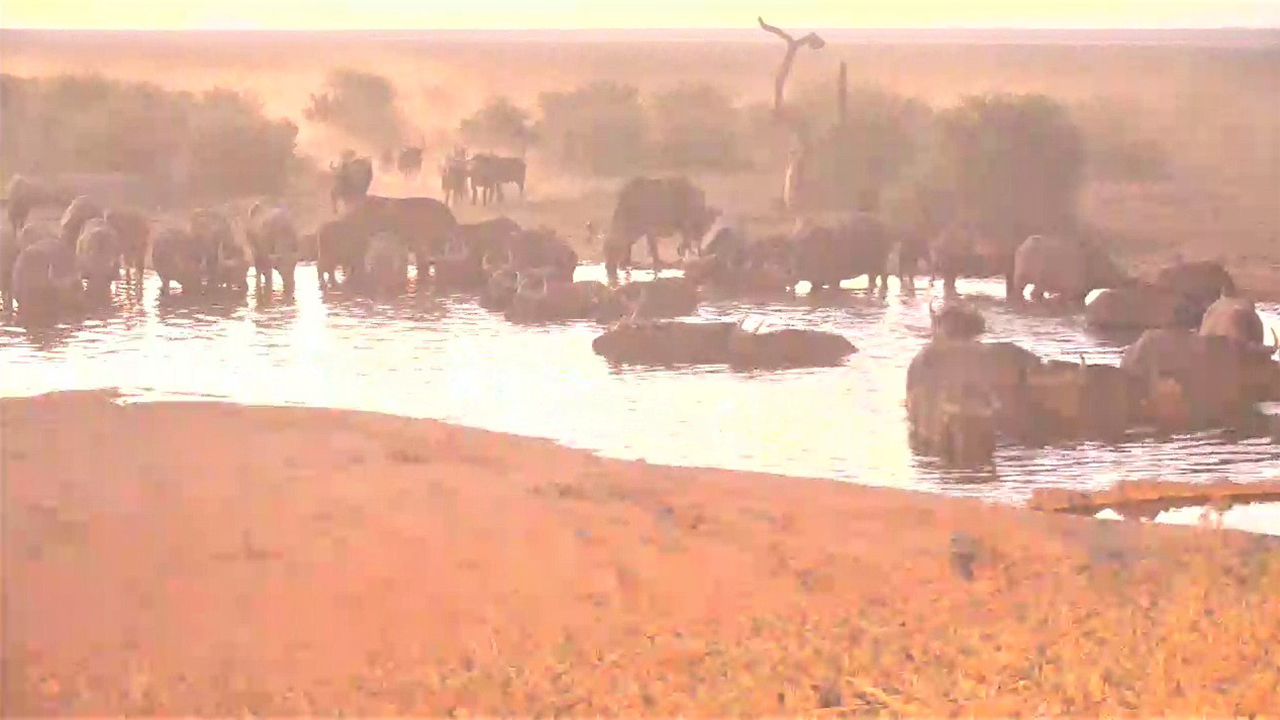 All very orderly and perfectly scripted above, except for the Egyptian goose in the foreground of the giraffe picture. If however, you prefer some variety to look at, we can sometimes offer that too, all in one photo… 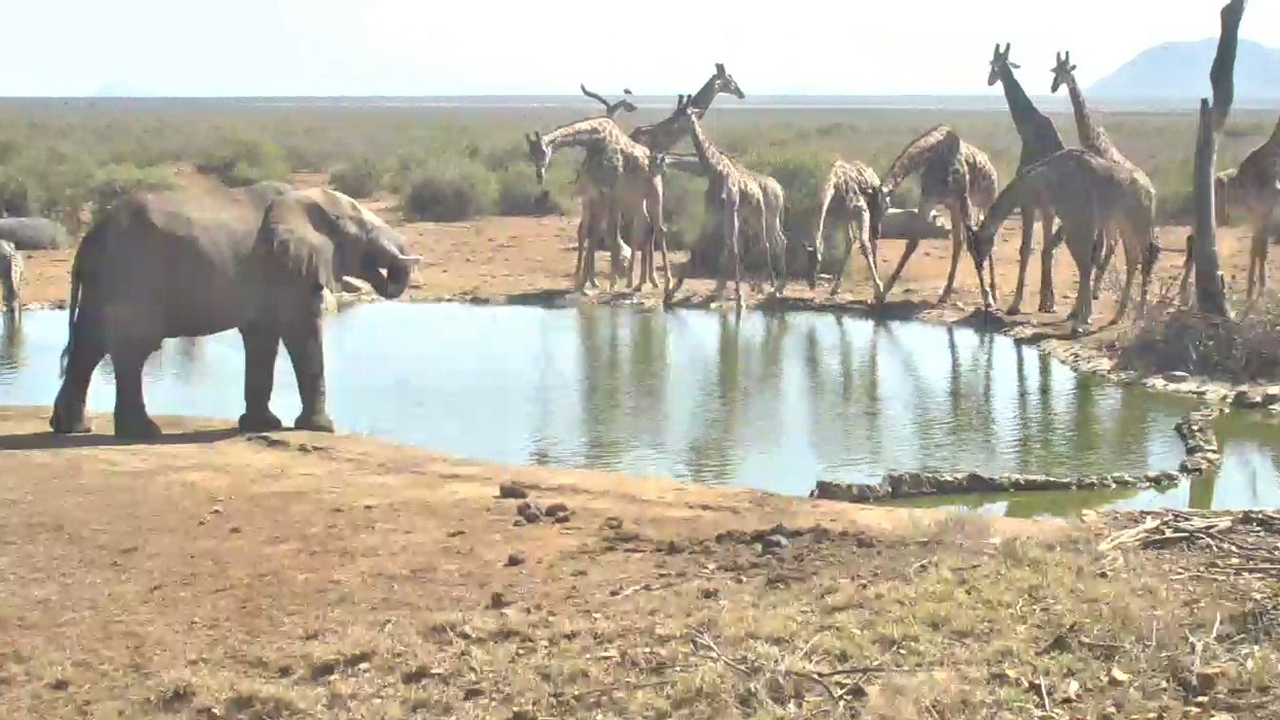 Lastly, we would like to leave you with a picture of a powerful young male lion visiting the the lodge waterhole in the early morning, looking towards the rising sun and the dawning of a new day. 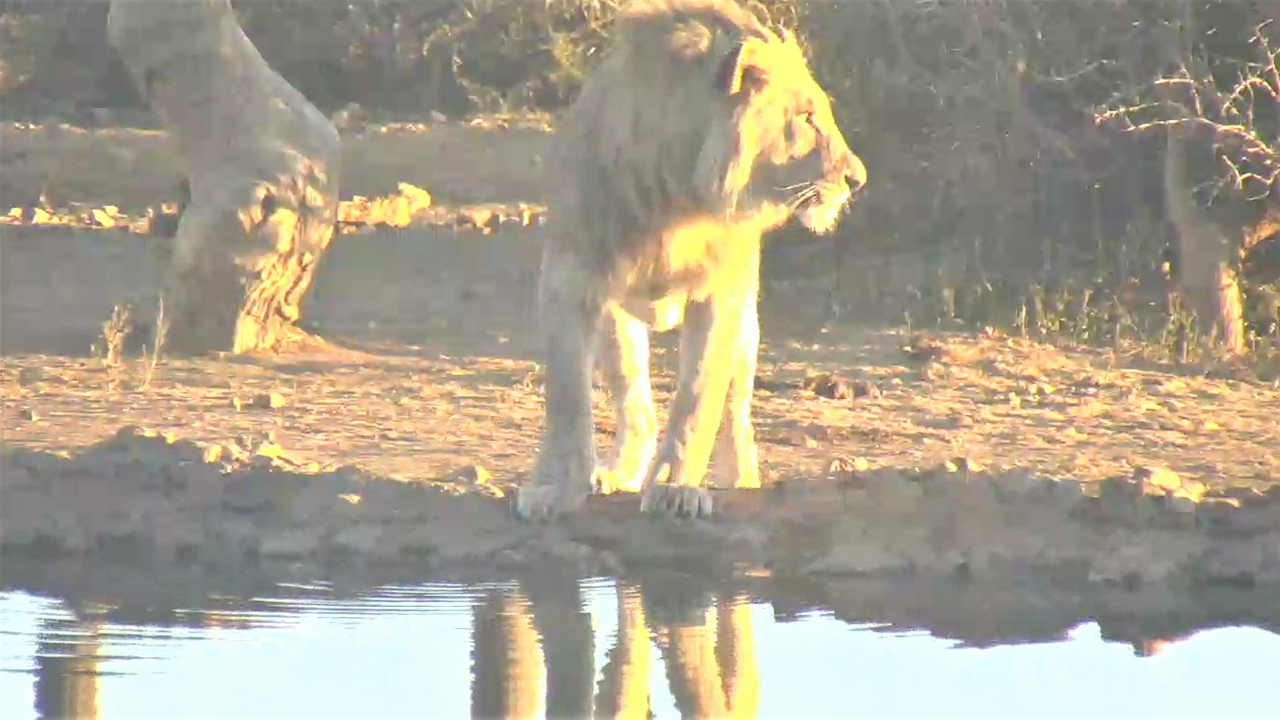 This is exactly what the whole world needs now, not only for Covid, but also to resolve some of the many other issues we currently face as humankind. For now, stay safe, and when you can travel again, we would love to welcome you to our home in the African bush.